Hello again to everyone back in the United States or wherever you are reading this blog. Today was our first day of real work in Honduras, and things started off well with some delicious Honduran coffee and a breakfast of fruit and pancakes. The goal for the day was to travel to Texoxengales or (Teo for short) where Ron, Josh, and I (Mike) were going to do water testing while the others, Christa, Kristen, Karen, Maynor, and Pamela helped out with a medical Brigade that was taking place. After eating we left to pick up Maynor at the HAF office and meet up with Dr. Constantino and Nurse Edith before departing for Teo. Unfortunately, the doctor was running a bit late, so Josh and I utilized the extra time by buying machetes and a file. While we waited, I attempted to sharpen mine with a file. Edith seemed very entertained by my failure but was nice enough to teach me how to hold the blade with my legs to sharpen it more easily. We soon departed on a long and difficult drive (only 18 miles but it took us around and hour) up into the mountains. We left at the same time, but somehow, Dr. Constantin0 managed to get there 30 minutes later than us. Perhaps he knew the dangers of the road better than we did. We soon ended up dividing up to test water and help with the medical brigade. The brigadiers (Karen, Pamela, and Maynor) helped with distribution of medicine after the doctor’s exams while Christa and Kristen helped in the area of child rearing (their words, not mine). This involved playing with bubbles, balls, and Frisbees and assisting the children in arts and crafts. Meanwhile, Ron, Josh, and I met up with Juan Jose (the caretaker of the water system in Teo) to talk about possible causes of the problems that they’ve been having with water contamination. We wanted to see the whole pipe system, so Juan Jose took us up to the water source following the pipeline. It was a pretty difficult hike, but Juan Jose told us that we were better than most North Americans. I guess that’s a complement. Despite a few falls, we made it to the source and took our sample. Then our guide took us down the path that had been made to go to the source, and it was infinitely easier. We took several other samples, and talked a little more with Juan Jose. He does quite an impressive job maintaining the water system up there. We took a few more samples, and then it was time for lunch. We were treated to an appetizer of coconut milk followed by a lunch of chicken provided by Vilma and her husband Juan Jose. They went all the way to Pinalejo to get the food for us (a long way) which was pretty sweet. Edith took great joy in sharing the story of my sharpening troubles with some other Hondurans. However, it worked out in our favor. Before long, the children were almost jumping in line to be able to sharpen our machetes for us. If you can tell me why that is a pun, I will bring you a machete. After lunch, Juan Jose gave us un limón real. (A giant lemon) We weren’t quite sure what to do with it, so we did what anyone would and decided to make lemonade. We then did a small tour of the town to see what people needed in terms of latrines and Justa stoves and then cautiously drove back down the mountain to Quimistan.  Later, we went to Jose Pinto’s house to borrow some tools and headed back to Martha’s to have dinner and ultimately make lemonade. We felt that this lemonade experience would be better expressed through pictures, so we have a short foto novela detailing the making of the lemonade below. 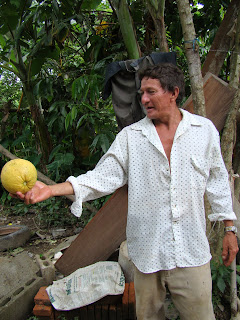 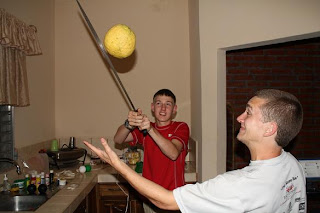 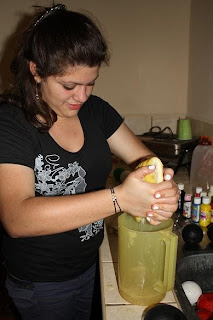 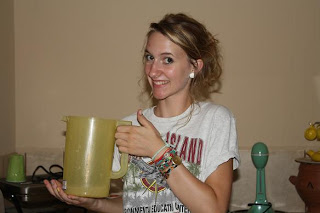 Also, here are some other pictures of what we did today. 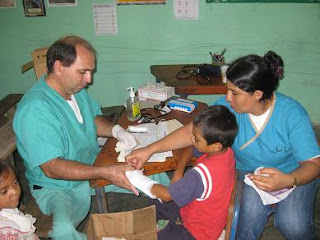 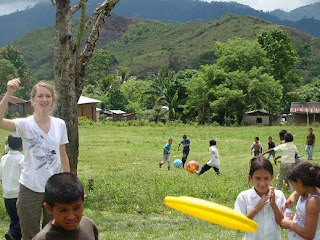 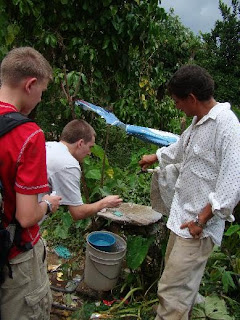 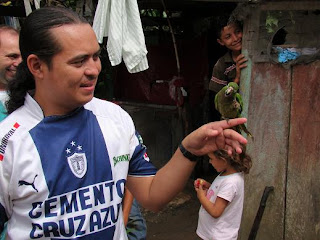 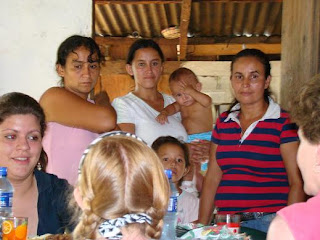 Vilma (in the stripes) provided us with lunch. 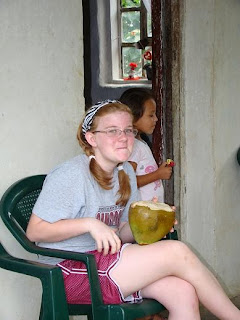