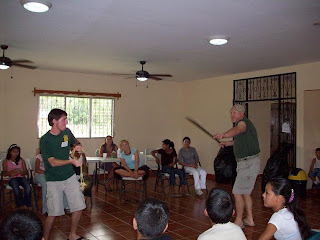 Today was an adventurous day. After breakfast, we did some housekeeping and played some games before the Agape Promise children arrived. After gathering for another delicious meal, Joey, Mike, and Kathy performed a wonderful skit telling of the story of David and Goliath. Of course lots of help was given by Jenn, our gifted translator. The kids thought Mike’s impersonation of Goliath was funny, especially as he taunted David, who was played by Joey.
The Agape Promise children were then taken back to Quimistan by Roxanne. They won the “packed like sardines” award in the truck. 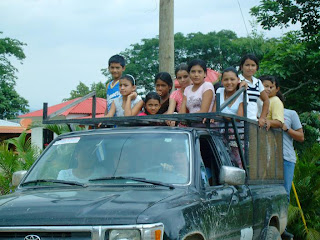 Upon her return, we went to Santa Clara. Much excitement occured on the way there, when the police tracked us down. However, despite Morgan’s belief that we were in trouble, they were just there to join us on our journey. With them as our escorts, we truly felt like we were in a parade, guns and all.
There was a birthday party in Santa Clara for a little boy, Ronnie, who turned four. 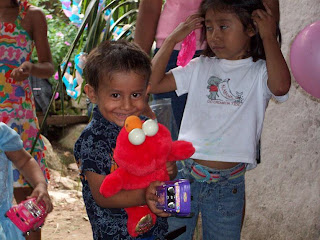 Unfortunately, we missed his party, but he was extremely delighted for the presents that we gave him. Out of his ballons and toy cars, Ronnie like his Tickle-Me Elmo the best. He couldn’t stop making it laugh.
After visiting the family, Arturo and his wife took us down to see their mission work for the village of Santa Clara. The main focus is this area which holds a kindergarden Monday through Friday and church as well. It then started to rain, but afterwards, we hiked down a ways to a small home that a family of eight lives in 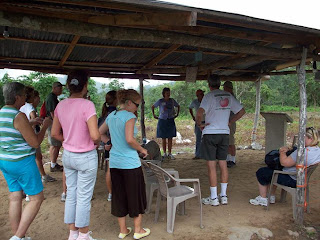 . The children loved the bubbles, ballons, and candy that were given to them as well. The hike back up surpassed Blakely’s wildest dreams, since just this morning she wished we would go for a walk.
Arturo had one more activity on our agenda planned for us. We visited a little boy, Jeronimo, and his family outside of Santa Clara. It was an eye opening experience for everyone to see the abject poverty. As you can see in the picture, this family was living in nothing more than a house of sticks with burlap and collected trash on the side of the road for money. It was touching to see the resilience within this family despite their conditions. 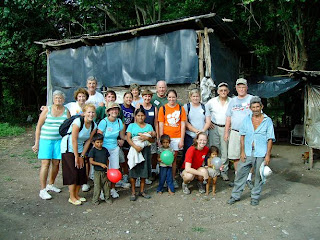 There was a quick dinner, and off we went to the Agape Church. Sam wasn’t kidding when he said they were spirited. Brittany and Blakely loved the little girls who did the ribbon dance and wished they could have joined them. It was a new and interesting experience. It was pouring down rain after the service but that didn’t prevent the brave souls of Blakely, Jenn, Morgan, George, Brittany, Vanna, and I of running over to Shirley’s for some yummy ice cream and soda treats. It was a great way to end an adventurous day.
Jenna Francis and Morgan Fletcher