So . . . another day in the mission field under wraps. Today was a very long but productive day. After devotion and breakfast, one group (of 12!) headed out to the kindergarden for more eye examinations. We were able to set up two eyeglass fitting stations which really sped up the process. At one point, the fitters had gotten ahead of the examiners. That was truly amazing. I got very comfortable with the auto refractor, seeing as how we helped 95 peo 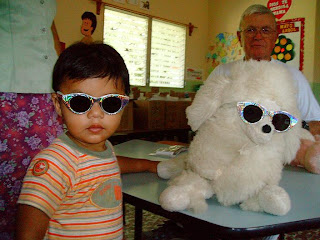 ple today. Blakely continued checking everyone’s blood pressure and examined the patients’ eyes for irregularities. Andrea and Ken were particulary helpful with doing the figuring for all of the prescriptions that the machine had compiled. And without Arturo, we would have been up the creek. Arturo has really helped out greatly with all of our translating needs in the examing room and more. We joke with him about opening his own clinic, because he enjoys so much predicting each person’s eyeglass strength. He is certain that he is always right. A career in optometry is probably not in his future! Jenn and June have also done a fabulous job translating in the fitting room. After the power came back on after lunch, we were able to get cranking again. People kept pouring in. We examined some of Mrs. Martha’s (the owner of the ranch we are staying at) workers’ eyes towards the end of the day. The picture that we have included tonight is of a boy who came to the clinic with his mother. Everyone thought that he was really cute. As it turns out, Brittany had taken a picture in the other room very similar to the one that I had taken. I thought that he wanted to see his picture, but apparently that was old stuff to him!
The construction group, consi 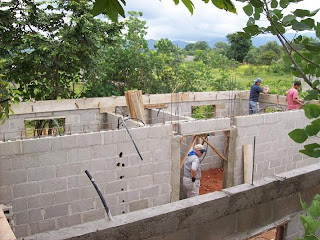 sting of Mike and Sam, continued their work at one of the sites today. I think that it was worksite number 1, but I am not totally sure. They mixed concrete and filled the cinder block walls. The excitement of the day came when Jose Pinto, the foreman, was moving a stack of blocks. Mike heard him shouting what sounded like “snake” in Spanish, and it definitely was. Jose had uncovered a small rattle snake, ready for action. Thankfully, Sam acted quickly and came to the rescue with with what turned out to be his quite deadly shovel. The afternoon was also busy. Mike said that the locals didn’t want the missioners to have to sit around! He said that he learned things about construction that he had never known before. Check out the progress on the house!
After dinner this evening, Jenna, Joey, Roxanne, and I attempted to go to the ever popular Saturday night event. . . a soccer game. The boys in town pay 15 limpiras and get to play from 7:00-9:00. Unfortunately when we arrived, there was no soccer to be watched. I think that we hadn’t gotten the memo. Roxanne took us on a tour of the town, and we went to Shirley’s. While at Shirley’s we figured out that the big Honduras vs. Guatemala game was on TV. We are thinking that that was probably where everybody was. Anyways, we came back here and started the blog.
Jenna has stayed up to keep me company while doing the blog tonight. Forgive me for any typos or mistakes. Everyone else has gone to bed, so I think that we are going to go join them. We hope that everything is well back in the States, and we will send another update tomorrow.
Buenas Noches!
Morgan Fletcher