Though today was hot and there was a lot of hard work to do, I think I can speak for the whole team when I say it has been a wonderful day.

We started out this morning by dividing ourselves into those going to work in Santa Clara and those staying to work in Quimistan and went our separate ways. Cookita, George, Roxanne, and myself stayed in Quimistan to help work on the kitchen for the kindergarten. Like I said before, it was hard work. We carried the rocks or boulders (whichever you prefer) to the trenches. And then we sat for a while because the re-bar had not been delivered yet. Luckily, our break was during recess so we were able to play with the kids. After a while, Roxanne picked up concrete and we began to fill the trenches. This took up the rest of the day and we will have more to do tomorrow. I’m so grateful that our friends, Nelson and Rigo, helped out today because we would not have gotten as far without them, as none of us are strong, young men. (No offense George) 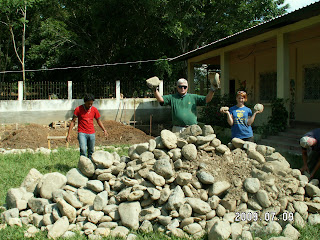 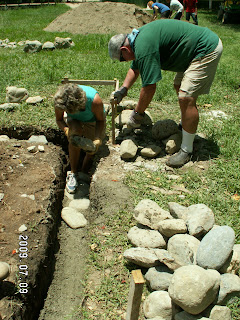 The group in Santa Clara also worked hard by helping the mason on the classroom and cleaning up the bricks on the house. However, they were extremely lucky because they were able to enjoy a short rain shower and chicken soup provided by the family.

This evening we went to deliver the food to the highway children, which is always such a humbling experience, and then went to the stadium to watch Nelson and Rigo’s soccer game. However, right as we got to the stadium, it began raining and the electricity went out. After many minutes and much persuasion for the opposing team to stay, the electricity came back and the game began. I’m pretty sure all of Quimistan will be talking about those crazy gringos at the futbol game, but it will be worth it. I don’t think anyone has ever cheered that loud…or cheered that much! 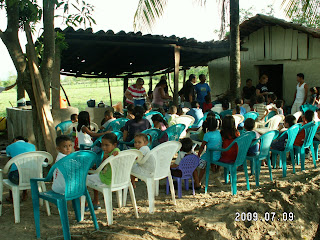 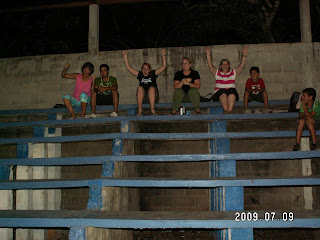 Today was hot, the work was hard, and our muscles hurt, but it was a wonderful day. We all know God has a purpose for us coming down here (and it’s not necessarily to build houses) and I personally think it’s reassuring when we can build relationships and spend days like today joking and working alongside our brothers and sisters in Christ.

Today was a wonderful day.