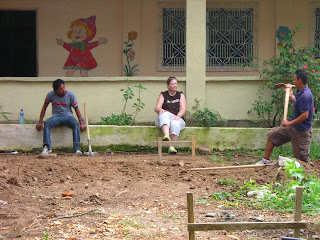 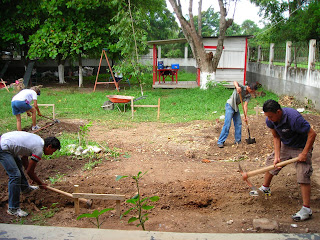 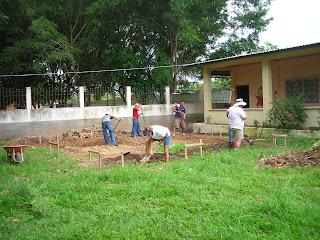 Today, the team was split into two groups of four with one group going to Santa Clara to work and the other remaining in Quimistan to work at the kindergarten.
Ardyn, Cecelia, Deirdre, and Sam (lucky Sam) headed up to the top of the mountain with the local support staff first thing in the morning. They spent the day moving bricks, mixing mortar, and building relationships with both the adults and children. They even visited some homes in the area who have needs and may be considered for future projects. Since today was Ardyn’s last working day in Honduras, it was very special and also a difficult day as she had to say goodbye to all the friends she has made over the past month.
Roxanna, Jenn, George, and Shirley started helping at the kindergarten early in the morning as well. There were two Hondurans on site when we first arrived and our job for the day was to dig the trenches for the foundation of the new kitchen. What a hard job it was! Using pick-axes, axes, shovels, and a machete, the trenches were dug by the end of the day! We couldn’t have done it without the hard work of Roxanna and George and the most welcome addition of our two friends Nelson and Rigo! We discovered that not all of us have the gift of “labor” and it was duly noted!!!
Tonight, we had BIG PLANS! We were going to watch the US/Honduras soccer (futbol) game at one of the local dining spots in town (El Fermin)! Our plan was cut short when the electricity failed as soon as we arrived. But we were fortunate because the site had a backup generator! Whew! but we soon found out that the generator did not (or could not) also run the television! After a short time, the electricity came back on and we were happy. It was already half-time and no-one had scored. In just a few minutes, 3 actually, we lost electricity again. After waiting for another long while, we decided enough was enough and we returned home to the ranch. How disappointing! And depending on your viewpoint you might be happy or NOT that the USA defeated Honduras 2-0!
An excellent day was had by all! We’re tired and hot but thankful for the opportunities to be of service and to share in the lives of our friends.
Buenas noches
Shirlita