Our day began with a morning devotional and a great breakfast.  We left Martha’s ranch for the hour plus drive through Pinalejo and up and around several mountains to El Venado.  This small village is less than a mile up another hill from the Guatemalan border.  This was the second year El Venado has been on the HAF ministry list.  Once we arrived, the single male school teacher divided his 21 students into four groups according to age so that the HAF team of Alan, Kathy, Tommy, Daniel (our translator) along with Marleni and Lenis, (two AP student helpers) could conduct a hygiene clinic.  The children demonstrated correct hand washing technique. 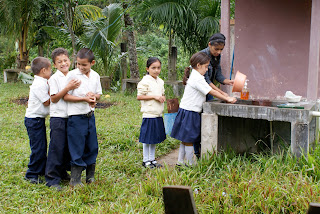 The children then “enjoyed” de-worming medicine, and then demonstrated tooth brushing technique, followed by a fluoride rinse, 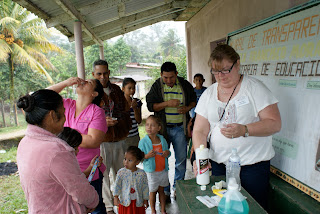 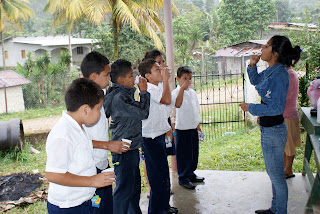 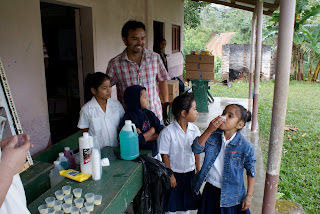 After the students were finished 30 other villagers, both adults and children, joined the hygiene line.  A light rain fell the entire time.
While we were conducting the hygiene clinic, Dr. Tino, ably assisted by Maynor and Itzamarie, (another AP student helper) opened their medical clinic just down the street.  They saw 35 patients during the morning, most of them leaving with one or more medicines to help with their ailments. All who could afford to do so left a payment of 5 Lempira (about 25¢) for this service. 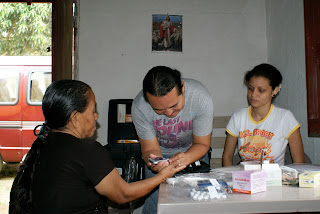 Most of the patients were there to treat simple illnesses, usually for their children, but one patient brought excitement to the whole room.  As Dr. Tino was using the new fetal heart monitor, the mother-to-be discovered, along with everyone else, that she was carrying twins!  What a joy to be able to share this with the community. 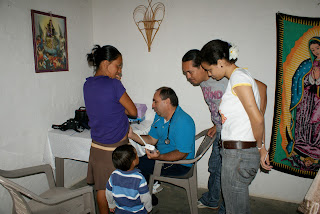 As soon as school was dismissed at noon the team set up the eye clinic and enjoyed sandwiches for lunch.  At 1:00 p.m. some 26 folks had their eyes examined and 25 pairs of glasses were fitted and distributed.  The trip home took and hour and a half due to the rain. 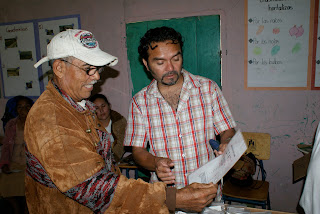