Today was pretty low key. We started at Martha’s Sunday School in Santa Elena. We performed a sketch of the story of Jesus and the disciples who caught fish when they tried the other side of the boat (John 21). We “caught” bags of colored Goldfish crackers and then passed them out to the group. Corey, Brittany, and Megan sang a couple of songs and the kids sang songs for us as well. All 150 kids were fed a meal which was funded by Martha. We played for a little while and returned to the ranch. A relaxed lunch and extended siestas followed.
In the afternoon we visited the meeting of the Agape Promises children. They meet each Sunday and have a lesson and meal.
We went to La Cosecha for an evening worship service that proved energetic as always. The power went out in the middle of the sermon, but the pastor continued speaking and gave praises for the light of God that was still present. A generator granted power for the rest of the service.
After church, we returned home and had an impromptu kitchen raid. We gave Gloria and Sandra the night off because we had lunch leftovers and we knew we would be home so late. It was fun to have our late night snacks of tortilla chips, salsa, toast, cheese, peanut butter, and fruit.
All in all a great Sunday…time for bed.
Enjoy the photos below: 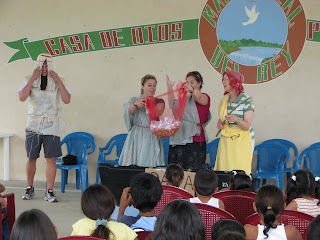 (Left to right): Corey as Jesus, Brittany and Megan as the “other disciples” and their catch of fish, and Melanie as Simon Peter 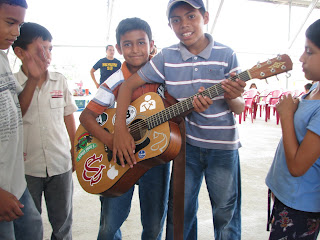 The “guitarra” was very popular and many of the boys wanted to play with it and have their photo taken with it. Corey was happy to share and even showed them a couple of chords. 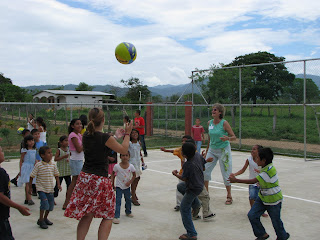 Many of the kids at Martha’s Sunday School playing with the beach balls we brought. 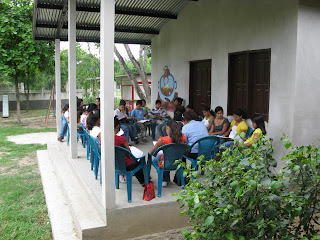 The older kids at the Agape Promises meeting on the front porch of the new kitchen that was finished last summer. Funding for this kitchen came from the Foundation. 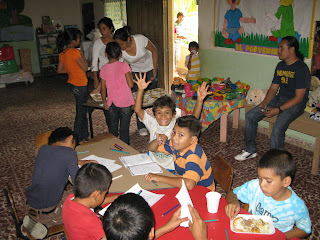 Some of the younger Agape Promises children posing for a photo while finishing their assignment. 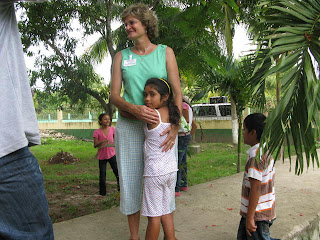 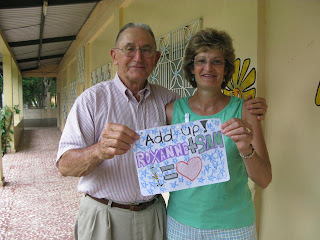 A lovely drawing that Vilma made for our favorite couple of leaders. 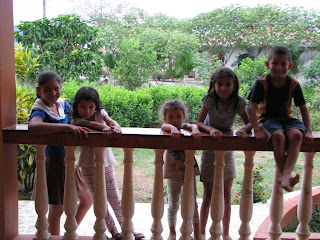 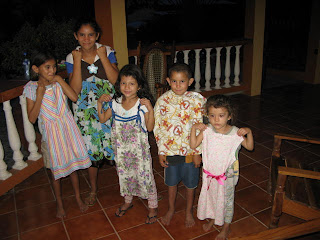 The 5 children that live with Jose Maria on the ranch. They have been a great addition to our times of relaxation on the porch. We found clothes from the donation pile to fit each of them and they look adorable in their new threads. 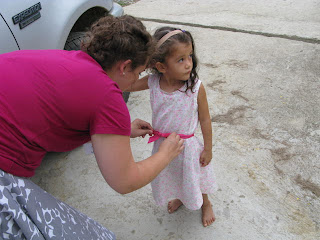