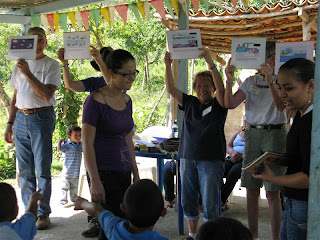 Today was a special day for the children of Tejeres, as well as for our team.  Two of our Agape Promise students, Ibeth (on the left here with the glasses) and Daisy (far right), had volunteered to do the teaching this morning.  We picked up the two girls and their AP teacher at the HAF office on the way to the Tejeres community along the highway right of way.  Both girls are in the 9th grade in school.  Ibeth has been in the AP program for four years and Daisy for five. 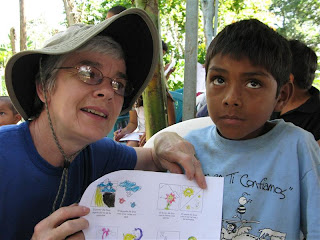 The lesson today was from Genesis, the story about how God created everything.  The girls taught as a team, and asked members of our team to help them with the visual aids they had prepared.  They did a really nice job as they captured and held the attention of the kids.

After the teaching and a question & answer quiz that many of the children participated in enthusiastically, the girls passed out coloring sheets and crayons.  It was very interesting to see how carefully and artistically the children colored the sheets with the few varied colors they had available. 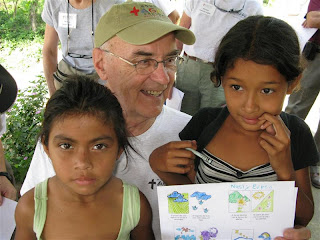 The students were proud of their coloring, and chose the team members they wanted to present with their masterpieces.  Of course when the camera came out, everybody wanted to be photographed and to see themselves on the view screen of the camera. 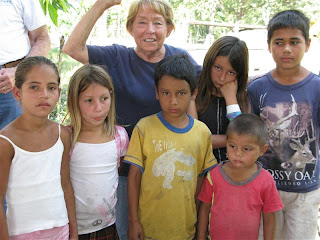 First we encouraged them to show their work, but it wasn’t long before we just captured the children in little groups.  Kay seemed to attract the greatest number of niños.

The final event, as always at Tejeres, was the meal.  The team members assisted in the distribution of the meal that was prepared by the minister’s wife.  Every child who wanted a second serving received one, and many of the children filled their plastic containers with food to take home.

Then as we were about ready to leave, a young man on a bicycle showed up with a snake that had been run over on the highway but was not yet dead.  The snake was about six feet long–a nice looking nonpoisonous snake.  After all the oohs and aaahs diminished, Lourdes carried away the snake by the tail, followed by about ten kids.  Someone mentioned that she and her family will have snake to eat.  This is Tejeres, one of the little communities alongside the highway outside of Quimistan.  You get your protein however you can.