I went to Santa Clara to work on the Amalia’s house with Steve. There are fourteen people living in a rather small Bajarike (stick and mud) house. At least their stove vents outside, but can you imagine cooking on a wood stove in Honduras? We are building a three-room brick home just down the hill. We originally expected to be adding to the home, but the slope of the land just would not allow it. They will now have two homes and a bit more privacy than they may otherwise have had. 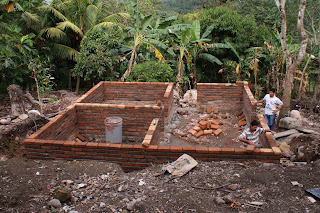 [looking down the hill at the new house] 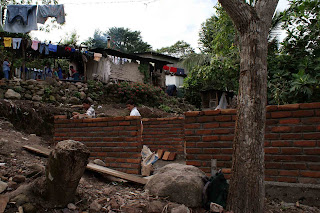 [looking up the hill toward the old house]

At lunch, we were treated by the Amalia family to the local version of burritos, which consists of two soft corn tortillos about three inches across, with beans, a bit of egg (and at other times possibly sausage) and some of the local cheese in between. They also offered some of the local “pica diablo” salsa tabasco, which is a relatively typical and moderately hot tabasco-style sauce.

After lunch, we were taken to Pueblo Nuevo, where we toured the local clinic. The Foundation paid to repair the roof on the clinic and to paint it inside and out. The place looks very good and they have a sign in front of the building which states the roof was repaired using funds from Honduras Agape Foundation “manifestando el amor de Jesuchristo a la gente de Honduras” (To show the love of Jesus Christ to the people of Honduras). I think that is pretty special. About 45-50 people who come to that public clinic every day and will see a message of God’s love because of their new roof. We also visited a family with 4 children who live in a stick and mud shack beside the road, on land which does not belong to them. We gave them some provisions, including sardines, hot dogs, beans, rice, pasta, margarine, eggs and butter for about $16. Oh, yeah. We also gave the kids a bag of cracker jacks.
—
‘Too hard’ does not equal ‘not required’.