Today was yet another hard workday on the job sites.  To begin Mark had finally gotten two new tires, tubes, and pedals for a little boy’s bike attached, tuned them up, and cleaned up the bike before giving it to the boy.  He really enjoyed the new additions and had a new-found sense of pride in his bicycle.We then mixed several loads of cement to complete the setting of blocks for Gloria’s pila and new bathroom.  With the bricklaying finished we were able to build up the substrate levels patting it down with a homemade Acme tamper (Toyota flywheel with a rebar handle), and mix even more concrete.  With this done we were able to begin pouring in concrete to form the floor for the outside patio in the back.  We were able to complete about one third of the concrete floor in the back.
On the other side of the home, once the walls were finished, several members were able to extend the roof to cover the newly formed bathroom.  With that done the wall between the joining bedroom was ready to be somewhat demolished to construct a new door.  Unfortunately this was not completed but some strong headway was made before the workday was over.On the other job site at the school more concrete was mixed, of course, as well as some brick laying for the kitchen.  The members also plastered the walls of the kitchen interior.  Many breaks were taken due to the amount of native Honduran workers participating who are all very eager to get a shovel in their hands and sweat on their brows.  During this down time some of the kids got to play basketball with a soccer ball with Michael and used a tree as the basketball hoop.  Also during this time Jeff played tennis with some of the school children using a rope as a net while the others threw a frisbee back and forth. 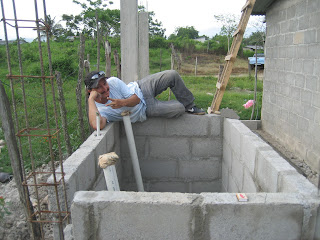 Spear chucker interpreter takes a break in a future Jacuzzi/Pila 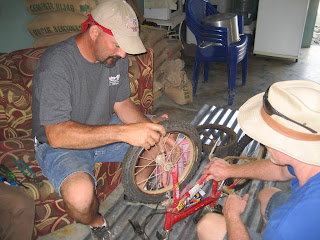 Mark and Jerry fixed a bicycle for a kid, completing an ongoing project of theirs 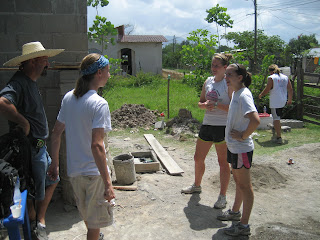 Hanging out before mixing mook; Mark sporting the sombrero 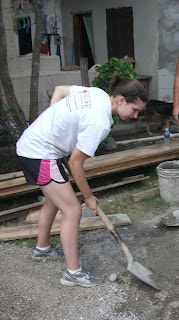 Virgin mook shoveler shoveling mook
Anna redeemed herself .  She gets “most improved” award… girl worked her butt off today
Jarred, Mark, and Brad