Saturday morning was spent with the team visiting with their sponsored children.  Alan went shoe shopping with his two new girls (Edrai – 4th grade and Cesai – 3rdgrade).  Typical of women shopping for shoes we went into 6 or 7 stores and tried on 20 or more pairs of shoes.  Yes, we were successful.  After shopping for shoes we headed for a local department store for school supplies. 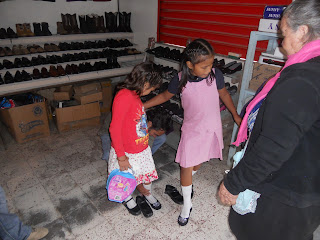 Kathy visited with Lenis and Ingrid, the two girls she helps sponsor.  She met them for the first time this trip and gave them some girly gifts.  After raising two boys in the states it is different to have two girls in Honduras. 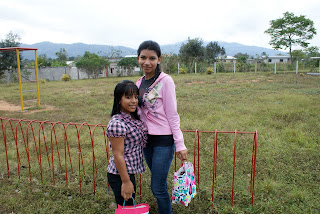 Tommy had a great visit with 11th-grader Sonia and her 2 sisters late morning through lunch, which included some time on Martha’s swings.  They then joined us at Martha’s Bible school, along with Tommy’s other sponsored child, 5th-grader Jessy and her family.  Jessy and family then returned to the ranch for a visit and some photos.  Even though the timing did not go as originally planned, it was all worked out in God’s timing, which worked it out much better, as it always does. 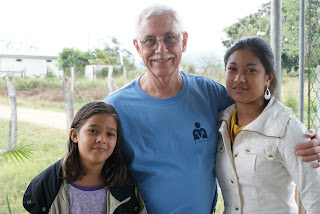 During the late morning and early afternoon the team sorted eye glasses to replenish the traveling stock as Monday we will conduct another eye clinic.  Additionally the team gathered the supplies for the dental clinic to be held Wednesday, Thursday, and Friday.
At mid-afternoon we journeyed across town to join Sister Martha’s bible school class.  This is one of the two weekly classes she conducts for some 260 children from nine different churches in Quimistan.  The bible study is conducted in a covered outdoor patio.  After the 90 minute animated lesson the children were feed a meal.  Sister Martha and her two teaching assistants held the children’s attention the entire time. 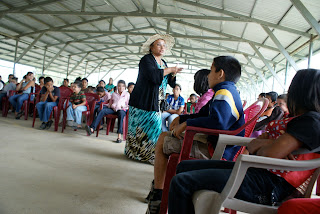 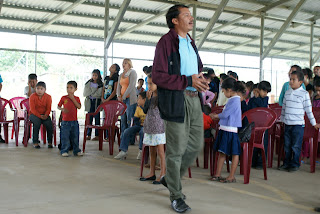