I’m catching up on some things that happened last week while I was visiting Santa Clara.  Those of you who have followed our activities there will remember that about a hundred biosand filters (BSFs) were built there last September and October and distributed to each home in the community.  Repeated testing of water from the community system showed contamination with E. coli, at least partially explaining a high incidence of diarrhea in their children.  It was believed that the BSFs would be a simple, inexpensive, and effective means for providing drinkable water to each home.  So I wanted to do a follow-up to assess whether there was an improvement since last October. 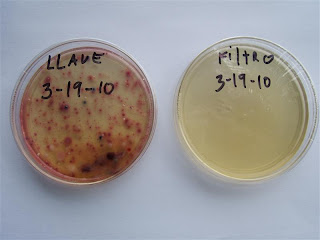 But the convincing evidence was that the only diarrhea reported in the community since last October has come from the one family who decided not to use their BSF because it was too much trouble.  Would using a BSF solve the problem forever for all families?  No; a need remains for training in personal hygiene and community sanitation practices.  But is the BSF helping?  You bet!  Did I drink community water during the week I was there?  You bet–but only the water coming from a BSF.  Did I suffer from it?  Not that I know.  I believe the BSFs work as advertised, and that the community kicked up their health standing a notch when they built the BSFs and put them to use.  Now Santa Clara is another community that has drinkable water and stoves that get the smoke out of the kitchen (and out of the lungs) and use much less wood.