Karen opened our day with a brief excerpt from Lucado’s book God Came Near, in which Lucado shared the story of an encounter with a blind man.  He challenged us to really “see” those around us as Jesus might see them, and we were introduced to the idea that “Faith is the bird that sings while it is yet dark.”
Energized by a breakfast of fresh fruit and pancakes, our small team set out for the morning activity. We assisted with Sunday School, led by our good friend Sandra, in Tejeras. The joy of hearing little children worshipping in song was added to after a couple of boys and girls participated in a balloon-blowing contest, clearly showing their enthusiasm. 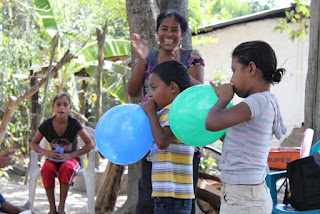 With the aid of the newly purchased easel, Sandra then taught the children a well-know Bible story: God speaking to Moses through a burning bush. 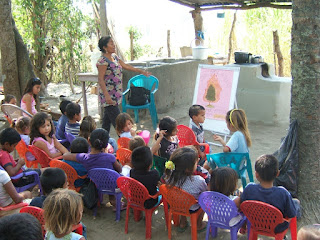 Afterwards a meal was served, and the hungry children eagerly ate their fill. 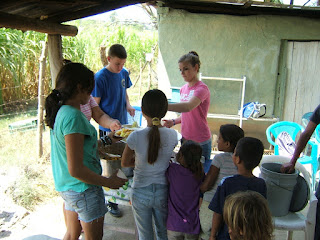 Upon returning to home base, we prepared for the afternoon with the Agape Promises students and parents. While the adult team members met with the older AP kids and their parents, Brooklyn and I joined forces with our translator, Stanley, to teach the elementary AP kids the story of Holy Week when Jesus was here on earth. Using colorful eggs filled with symbols pertaining to the Easter story (more commonly known as Resurrection Eggs), we hoped the kids would easily remember what happened so long ago. From Jesus’ arrival in Jerusalem on a burrito and the tomb Jesus was buried in containing nada, the kids were reminded of God’s plan of salvation.
Once we finished teaching the younger kids, they were introduced to the game we know “Red Light, Green Light.” “Simon Dice” (a.k.a. “Simon Says”) was another game played, allowing Brooklyn to practice her Spanish skills and letting me spend more time with the adorable children that inhabit this country. 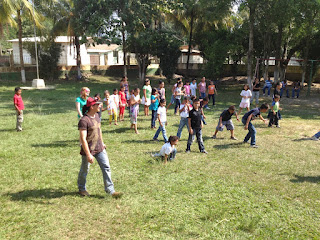 Supper was soon served to the AP kids, the goody bags prepared the night before were passed out, and goodbyes were said to new friends. 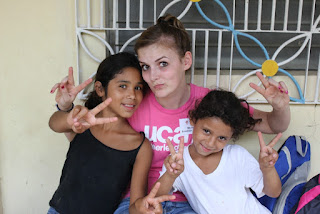 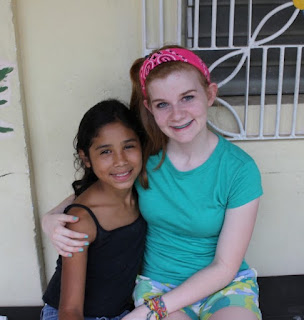 With a bit of time to kill before dinner, the three teenage team members (Josh, Brooklyn, and myself) played futból americano with a couple of the children living here on Martha’s compound. 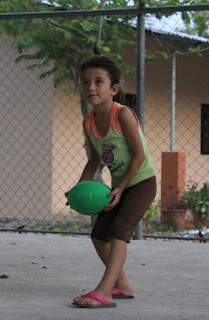 Many laughs and smiles were shared, and even more new friendships were made. While I sit here and reflect on the goodness of God that allows even the shyest of children to have an impact in my life, pure excitement for the activities yet to come flows through my veins.
Hasta Luego!
-Kristen