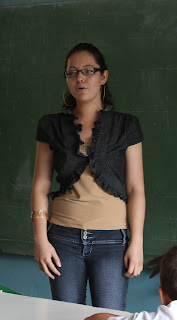 Our day today started with an early breakfast visit with Iveth, one of our newest AP graduates preparing to start her university classes in dentistry in San Pedro Sula in August.  Since we did not have a translator with us that early, Joshua got to practice his Spanish skills and helped us have a meaningful conversation with her.  We had a delightful time of fellowship over the meal, and then she expressed interest in joining us for our activities in Santa Clara.  She was willing to try her hand at teaching some of the VBS material, so we gave her the package of information to read on the way there. 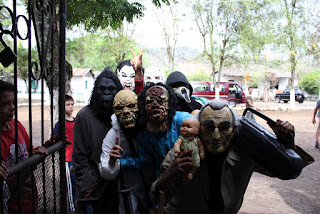 Just outside Pueblo Nuevo, on our way to Santa Clara, we passed a couple groups of adults walking along the edge of the highway dressed in eerie costumes.  We found it strange, but didn’t really think much about it until we found ourselves face to face with a large group of similarly dressed “ghouls” shortly after we pulled into the elementary school yard in Santa Clara.  As we moved toward the doors of the school, they came near and asked Karen for money.  Following her reply of “no dinero” they danced around and eventually posed for a photo.   We inquired about this strange display and were told they were carrying out a local custom that’s part of Holy Week.  Of the varied explanations for it, including an antisemitic basis, one that may have a church basis is that they are playing the role of Judas Iscariot.  They go through the villages frightening people and ‘demanding’ money (such as 30 pieces of silver).  It is done by adults and involves a lot of noise and threatening.   Almost as soon as they appeared, they piled into a passing pick-up truck and disappeared from sight.

After their departure, the team had the opportunity to practice the spiritual fruit of patience as we awaited the arrival of Stanley and Maynor, who had blown out a tire when they hit a rock at the base of the hill to Santa Clara. Following about a 40 minute delay, they arrived with our VBS supplies. 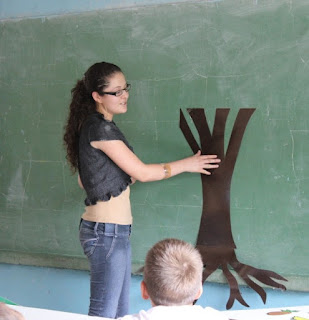 As I previously mentioned, Iveth read the VBS teaching material while we were on our way to Santa Clara and volunteered to teach part of the lesson.  We learned soon that she’s a quick study.  Here she is teaching the Santa Clara students how God can develop fruits of the Spirit in us only if we remain rooted and grounded in the fundamentals of faith.  What she learned during her time in the AP program provides her that firm foundation. 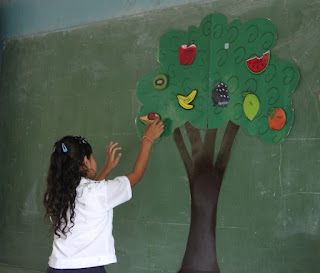 As Jesus taught us, He is the vine (here, the trunk) and we are the branches.  When we stay connected to Him, the fruit can grow, as these students learned. 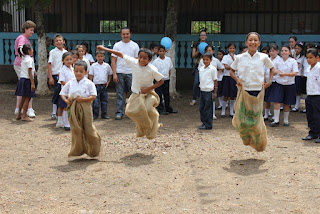 All work and no play — No good.  The kids need to MOVE! 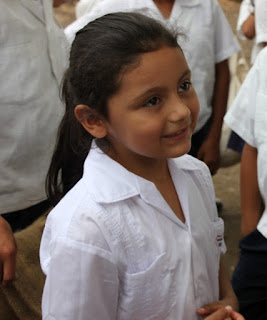 This bright-eyed student came up to us and started counting out her numbers to us in English, from one to one hundred with little prompting on our part. 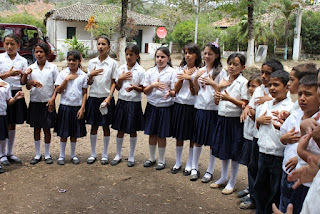 The students, all dressed in their school uniforms, gathered in a circle to sing songs and play assorted musical games.  Here they are singing about their “corazón,” where Jesus resides. 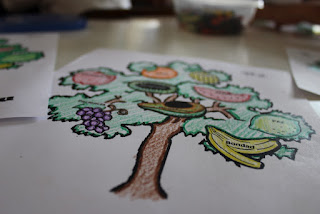 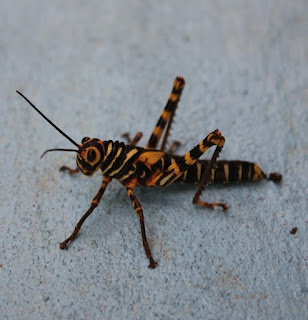 The children diligently colored their fruit trees as a reminder of the lesson material.

Following VBS, we drove down to the White Dove trilingual school so Joshua could see the progress on the facilities there over the past two years since his last visit.  We were greeted there by large numbers of grasshoppers, locally known as “saltamontes.”  Unfortunately, the grasshoppers were very busy devouring tender green spring growth in the village.  We hated to see the devastation they had already done in the past two weeks and prayed for their early departure, before the greenery around the school was totally destroyed. 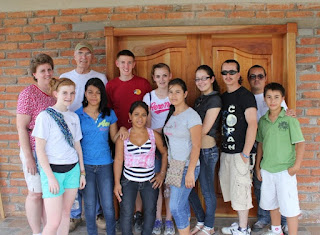 We gathered today’s VBS team for one last photo before returning to Quimistan.

Having arrived back at the ranch a little earlier than usual, the team spent time relaxing on the porch playing cards.  After about an hour, most of the team and the VBS helpers headed to Pinalejo for a brief concert by Stanley and his four member band, Pajizos.  While there, we visited Maria, a former AP student of the Livingstons, who had recently delivered a little boy. 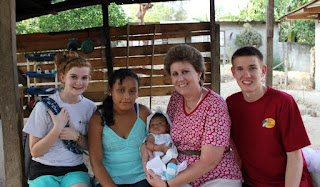 A special supper followed with special guests, Martha and Gary, and Jessy and Maynor.