Yesterday, the team headed to Sandra’s new house in Quimistan to level the ground around the site. Sandra is a teacher at the Agape Promise school, and cooks and takes care of the groups that stay here.
Chris, Allison, Joe, Dane, Aaron, Alex, Erin, and our crew of translators and drivers worked on the “landscaping” crew. We started with a huge mound of dirt (and rocks) behind the house, and made steady progress in moving wheelbarrow loads to the front and sides of the house, where they were leveled out. We are now pros at shoveling and wheelbarrowing, and with the addition of all the dirt that was in our socks, that mound was much smaller by the time we left. 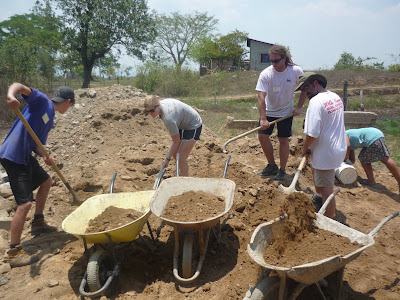 Jerry, Morgan, Brad, Sarah, Jarred, and Sam basically wired the entire house for electricity, which was quite an accomplishment. It got off to a slow start without the presence of fish tape, so they used cable instead to push through to the outlet, then pull the wire through. Once the fish tape arrived, the wiring went much faster. There were no wire strippers, so the team used wire cutters (or knives) to cut off the insulation on the ends of the wires. Most of the team handled the two-receptacle circuits, while Jerry the electrician handled all the overhead lighting and hooked up the breaker box. 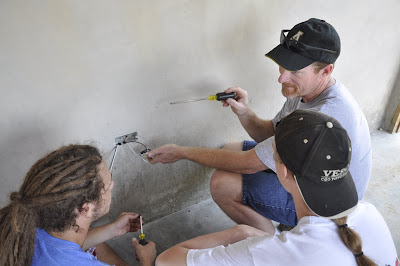 We ate lunch at a restaurant in Quimistan, which had actual air-conditioning! The food was delicious, and was a buffet that included chicken, ribs, and pork chops. It was a little hard to keep working after all that, but we went right back to shoveling and wiring like champs. 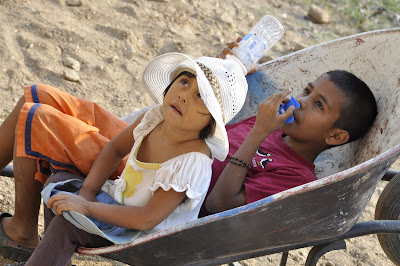 After we finished working at Sandra’s house around 4, we headed to a souvenir place for some shopping. Debbie and Daniel helped us out with the bargaining, and everyone was able to make plenty of handmade Honduran purchases.

Overall, it was a great day of service, and even though some of the jobs were a little difficult, it was a real opportunity to remember our purpose in being here. We continue to be amazed by how God is blessing this team and ministry, and look forward to Texoxingales and Santa Clara tomorrow!
Erin
(with an electrical consultation from Morgan)