George, Bruce, and Jim went back to San Pedro Sula on Monday to gather information on corn grinders. HAF is exploring the possibility of helping La Montanita and Teo acquire corn grinders through micro-economic loans, like they did in Santa Clara. A corn grinder is not simply a convenience item. The women, and many times the children, spend hours per day hand grinding the corn.

We visited two suppliers and collected general information on the grinders, along with price quotes and maintenance requirements. One supplier offered us a 15% discount and the other 25%. We will visit La Montanita on Tuesday and Teo on Friday to discuss these projects.

On Monday PM, several team members visited Tejares to follow up of four items. A woman needs help to complete a latrine project. We will return on Friday to work with Rigo, our construction coordinator, to pour the concrete cover for the cistern and a pad for the toilet building.
We then visited a woman’s house across the very busy highway to determine if we could repair a stick-mud house that was on the verge of collapsing. The woman said that she could hear the house moving at night. There are 7-8 kids living in this house. A log had been “planted” against the front wall to keep it from collapsing. The back wall was leaning inward at least 20 degrees and there was no practical way to support it. Rigo suggested that the back and front walls and the tile roof be replaced. We all felt an immense sense of urgency to fix this severe safety problem. A proposal was sent to the Board with the hope that this safety problem can be fixed quickly.

This afternoon 13 women from LaMontanita arrived on the busito at the Quimistan Hospital for testing. Dr Elsa greeted them and attended to each of them. The women from our team joined them in the waiting room. You could tell they were nervous. The crafty members of our group began teaching them how to make paper flowers. Five minutes later there were smiles all around and happiness from sharing a joyous experience. Two mothers brought their babies who were passed around among them and us for lots of love and laughter. Two hours later we waved goodbye as they left carrying their bouquets and lots of fond memories for all of us. 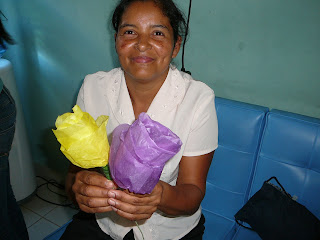 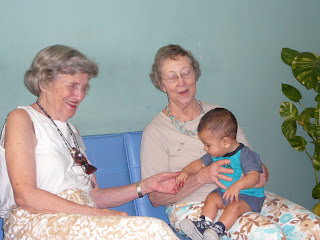 Thanks to a donation from St. John’s, our new Focometer went into use for the people of Tejeras. After a slow start, the team helped us to get organized and we tested almost 40 patients. The God moments were many. People who had extreme difficulty reading or who had poor distance vision, were overwhelmed when they tried on a pair of glasses that changed their lives. Their smiles and happiness brought tears to our eyes.

One man who was 79 and had lost one eye is a wonderful story. He wanted to be able to read better, but could not afford glasses. He was fitted with reading glasses
and also given a pair of sun glasses. There was a dramatic change in his ability to read. He was so thankful, he expressed his gratitude to most everyone he could. He was grateful the HAF missionaries came to help him, his village and his friends. He said God surely sent us to help them lead a better life. It was truly a very emotional experience.

Catherine Vandegrift and Denny Mcgurer who were handling our check out table said everyone who left thanked them, even gave them hugs in appreciation for what they had received.

God was truly with us all today. 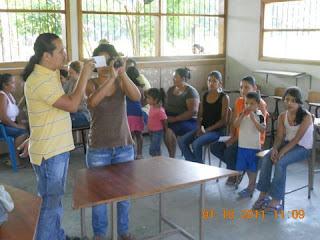 It was our distinct pleasure to have Maynor, his fiancée Jessy, and Dr. Constantino as our dinner guests. The entire team was in agreement with Maynor’s choice for his bride. The wedding date is planned for March 17, 2011. We wished them both much happiness. Dr Tino said he would get them a discount in the maternity section of the hospital.

Dr. Tino was asked many questions by the team about the hospital’s future plans, the success of the medical brigades, his background and experience, malaria and aids. He answered every question with openness and honesty. We were all very impressed with his dedication to improving the health of the people of Honduras.

He spoke about the impact of Justa stoves on respiratory problems in LaMontanita. His response was that there has been a significant reduction since their installation. Additionally, now that the Community Health Care workers have access to the nebulizer, they are able to treat the symptoms much quicker. When asked what the major health problems were in Honduras, he stated pneumonia and diarrhea.

Dr. Tino is returning on Thursday to provide an annual review. 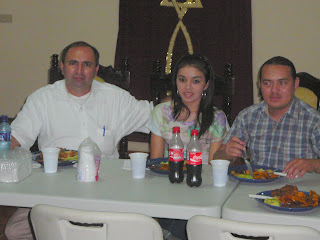