So, the unavailability of the internet has led to a little delay in blog updating. This blog will therefore contain the goings on of the past two days!

Day 3 was quite a busy day. It all started with our arrival at the elementary school in Quimistan. The task at hand: de-worming medication, tooth brushing lessons, and fluoride for 867 awesome kids! The kids were all very excited to see us and swarmed the team immediately. The operation was set up in 3 stations. 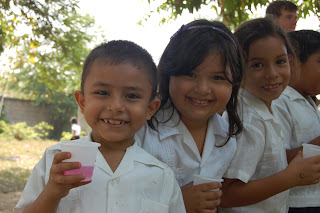 The first was the delicioso banana flavored de-worming station. Erin, Aaron, Allison, Jerry and Brad, with Maynor’s help, delivered the tasty treat to the kids and sent them on to the next area. Station 2 consisted of dental hygiene lessons from Morgan, Joe, Chris, Jarred, and Daniel (translator Daniel). The kids were each given a toothbrush and travel-sized tube of toothpaste. We did our best to dole out the pink ones to the girls and the blue and green ones to the boys. Morgan provided a demonstration of the proper technique with a giant mouth model. We could
tell that many of them were not used to brushing their

teeth. There were lots of laughs and possibly some gagging when it came to brushing their tongues. Lots of spit flew at the next station! Sarah, Dane, Alex, and Debbie (our other translator) reported mixed feelings when it came to the bubble gum flavored fluoride’s taste. After coaxing the children through the required one minute swishing regimen, it was quickly and forcefully expelled from their mouths. Both the tooth brushing and fluoride station team members were extremely careful to stay out of the firing range. The kids aren’t shy when it comes to spitting!

After a delicious lunch of tilapia fillets and rice, the team finished up with the treatments and prepared for the Tejeres feeding. Jim provided assistance when needed at the de-worming station and took untold numbers of pictures. 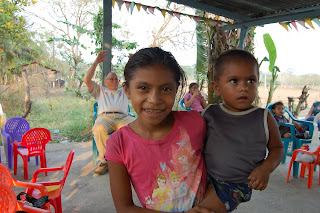 One of HAF’s newest projects is the feeding of about 70 children from the roadside community of Tejeres. Some three years ago, team members saw the hungry children and their families gathering food from the dump near their homes. The team took them a meal later in the week and notified the foundation. This was only the beginning of Tejeres feedings. As of about a year ago, the kids have been fed on Wednesdays, Fridays, and Sundays. Gloria cooks and serves some of the meals, and a lady from a local church serves others. The entire team got to go and witness this incredible event. Two of the children that stood out were Kevin and Dooley. Kevin had just returned from a 3 month Boston hospital stay in the States. Only he was granted permission to leave Honduras after being severely burned from melted plastic at the landfill that he was collecting for his family to sell. He had sustained third degree burns and needed skin grafts, treatment he could only receive in the USA. The surgeons were only able to save his thumb on his right hand. Dooley was another heart breaking case. It was after Wednesday’s feeding that she was run off the highway by a gas truck, causing her to break her arm. Dooley couldn’t hear the truck or screams of her mother to get out of the way because she is deaf. She was taken to the Quimistan hospital for x-rays and a cast. Our hearts were all touched by the joy the kids had over simply receiving a meal. They were all smiles when Alex and Jarred whipped out an American futbol.
Friday saw the touching of many hearts and the joy of many children!

Okay. So now we’re all up to date. Let’s continue on with today!

The team headed out in the van and Turnipseed Excursion around 9:00 after being briefed by Allison for Vacation Bible School. After driving about 45 minutes through windy, dirt mountain roads, we reached the village of La Montanita. The kids were waiting for us when we pulled up to the school and unloaded the Armor of God teaching materials. Four stations, consisting of art, music, Bible teaching, and games, were put in order. The kids were divided up into four groups, and the rotations began! 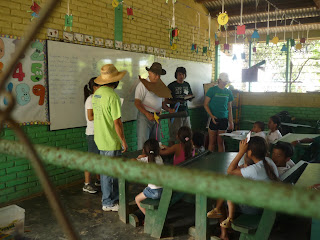 Morgan and Aaron delivered a kid-friendly Gospel presentation and Armor of God lesson with the help of translator Daniel. Two of the Agape Promise university students, Vilma and Laura, were also there to help lead the kids in prayers of confession and prayers for protection against the attacks of the enemy. The kids really enjoyed throwing the foam darts of the enemy at Sam and Chris as they defended themselves with Allison’s crafty and creative belt of truth, breastplate of righteousness, helmet of salvation, shield of faith, and sword of the Spirit. They were also taught to be eager to share the Good News with the sandals of peace. Everything flowed extremely well with the transition from English to Spanish, and the kids really seemed to catch on to what we were telling them. The presence of the Holy Spirit was truly in that place! 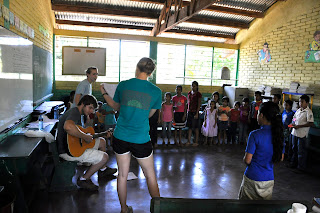 Beautiful songs of praise echoed throughout the school grounds as Erin, Jim, and Sarah led the kids in worship. Erin beasted it up with her macho Spanish skills as there were not enough translators for them to have one. They reported that the kids were enthusiastic and engaged, a true testament of the Lord’s faithfulness to come through in times of need. 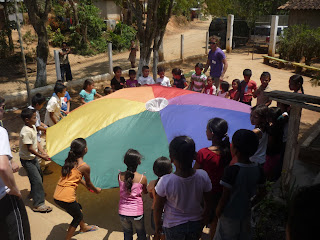 Jarred, Dane, and Joe led the kids in some exciting Bible games. The kids especially loved the parachute exercises. They also enjoyed participating in the relay in which each person had to don the full “Armor of God” before they could run for their turn. Lastly, names were learned as the rag ball was thrown around the circle. I can testify to the fact that fun was had, as some of our Bible lesson participants struggled to keep their focus because of the screams and laughter of those outside the classroom. 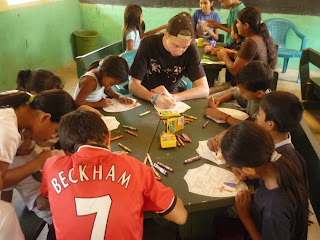 Finally, the art station! Once they were taught how to color and were assured that it was okay for them to do so, their creative sides were unstoppable. Alex, Brad, and Jerry were witnesses of extreme shield of faith and sword of the Spirit decorating. The otherwise completely obedient children found it difficult to pry themselves away from their masterpieces.

The team feasted on our packed PB & J’s at the home of Juana, one of the ladies who operate the little bakery established recently in the village. They were able to start the bakery with proceeds from their handiwork making “tortilla cloths” that are finding a market in the U.S., plus a loan from an area Catholic church.   That bakery provides work for women of La Montanita, who also cooked the delicious snacks for Bible school. We were able to see the beehive-style adobe oven that makes the operation possible. It was after seeing a breathtaking pineapple plantation down the road that the team returned to the school to finish up the afternoon. 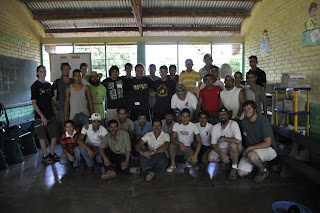 Once back at the school, the guys led a discussion with other young men of the village about the importance of refraining from drug use. Apparently that has become a recent problem for some of them. The Spirit had opened their minds to receiving the message the guys shared. From what I hear, it was a really cool time of sharing. The girls talked with Debbie, Vilma, and Laura our about college and tried to encourage them to stay strong in their Christian walks. We really enjoyed learning about the differences between education in the US and Honduras.

We have had no shortage of God experiences since our arrival in Quimistan. We truly serve an awesome God.  Hope all is well in the US of A! We do miss our families, but I can assure you, all is well in Honduras!