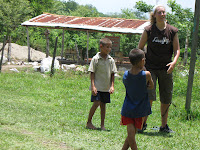 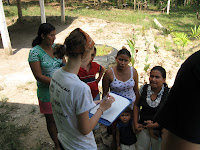 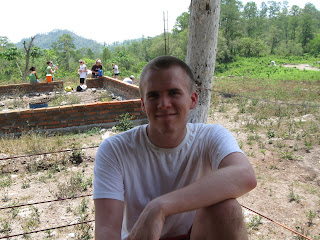 Today dawned bright and exceptionally early, especially for those of us who were unfortunate enough to have gone without sleep. After a traditional breakfast and devotion we departed for the village of Santa Clara, a town much smaller and more secluded than Quimistan and undoubtably less accustomed to gringos. It was there that our work began. We split up into groups: Ardyn, Donald, Brian, and I pick-axed and shoveled the rocky ground to create footers for the preschool, Eric, Lila, and Sam planted beans in one of the fields, and the rest of us carried bricks from the kiln to the house being built (or as the case turned out to be, played with the kids, otherwise known as building relationships).Santa Clara is up into the mountains, so though the temperature was never cool enough to justify an end to my habitual complaints, it definitely wasn’t as hot as in past years. During the lunch break Ardyn demonstrated her beastly soccer skills which are, to say the least, impressivo. In the afternoon, Donald, Lauren, Roxanne, and I rode with Andrea, Maynor, and two doctors to another small town, Banderos, to visit a bimonthly health clinic there. The clinic was held in a one room school house which we learned had 54 students spanning six grades. The doctors had a list of names of patients, and with Andrea’s help I checked them in. There were about thirty names listed, but we also accepted about fifteen kids who were not on the list. There were two pregnant girls who looked no older than fourteen, a boy who had gotten his neck sliced by a wire in a bicycle accident, a man who had massive road burns on his legs when he was hit by a truck, and many others in desperate need of medical attention. After about three hours the small, hot room was inundated with impatient patients, and we had to start turning away those who weren’t on the list. All of those who received an exam were given bottles of the pills they needed, whether it be Tylenol or the sadly all too common tapeworm medication. During the often long breaks in the line, Andrea explained more to me about the Honduran culture than I have picked up in the last two years here. Even though we were all split into separate groups and we may not have necessarily been with our friends, we were all working toward a common goal, and not the soccer kind.
-Christa (17)