After a weekend of relaxation and some minor celebration we returned this morning to our work of service, another Monday spent in deep in the Northwest of Honduras.

The trip so far has been a remarkable experience.  An opportunity to explore a new country, to meet new people and to witness a culture that is unique and unlike our own.  As per a typical day, our morning began with a 6:00 am wake up call, and breakfast at 7.  The meals have been mostly exceptional, served to us by two lovely hostesses, Sandra and Gloria, and have featured jalapenos and peppers constantly, even for breakfast.  Unfortunately the language barrier has prevented us from truly getting to know Sandra and Gloria, though if two nicer women exist in Honduras they would be a sight to behold.

After breakfast, we divided into two separate groups, off to two separate job sites.  One at Gloria’s, and the other at a school, off in a separate village from Quimistan.  And that was the group I joined today.

Though school was not in session today, several neighborhood kids still ventured to the site to help us mix concrete and to share in our breaks as we played football, futbol, and good ole fashioned American baseball conducted with a plethora of sticks and broken plastic pipes for bats, and a small sized hollow plastic soccer ball for a baseball.  The games today were as competitive as always with the kids eager to pitch and to take their turn at the plate.  Because of their relative unawareness of the official rules, I was able to manipulate the officiating in my team’s favor, which was clearly necessary as my team fell behind early and struggled at bat.  As we tried to launch of comeback, one of my young teammates, Mauriceo, got a hit but stumbled as he ran to first and ripped open a a pinky toe with the toenail nearly detached.  After an immediate pause for First Aid Kit attention, the young Amigo eventually returned in the inning and got another hit, placing him at hero status in my eyes.  We’ve witnessed a lot of violence on this trip.  The first aid kit has come in handy.

At that point, we paused for lunch.  Peanut butter and jelly sandwiches as always.  The hardcore work at the school site was intermittent today, and filled with breaks and pauses to play sports and interact with the youngsters.

After work we ventured briefly into town for ice cream before returning to the Villa to rest for an hour and then go off to a fancy and delicious supper.  At dinner we were joined by out hosts, Martha and her husband Gary, our translator Maynor and his wife Jesse, and our beloved compadre in work, Stanley.   As we waited for dinner we enjoyed the air conditioning and a big screen television where we found “The World’s Fastest Indian” with Anthony Hopkins in English with Spanish subtitles.  After dinner, Stanley told me that we would have the opportunity to meet his family tomorrow, to which I replied, “We are your family now, and you are a part of ours.”  And that has been the true and often unspoken blessing of this mission.

Though this trip is only for a short period, it is a reminder that we are all in this journey through life together, as different as a bunch of Gringos from Wilkesboro and the fine people of Quimistan can be.      Not only do we live out our own lives, we in a way live out the lives of everyone around us.  With the ability to help those in need, pick up those who have fallen, and save those who are lost.

Most of the hard work of our journey is done now, with only a couple days left on site before a day of rest, but our work will always continue, and the size of our family will continue to increase, especially in the number of Hondurans. 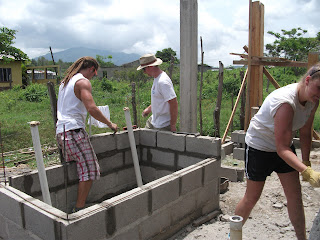 Jarred and Jerry laying block for the pila behind Gloria’s house; Abby (cut off) doing demolition work on the old pila 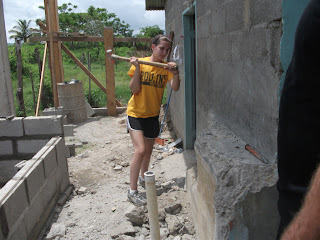 The first, and likely last, picture of Anna working 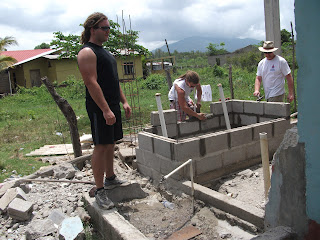 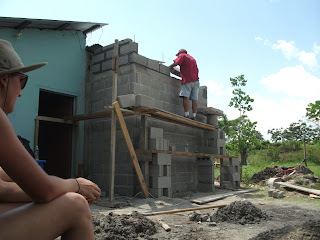 Progress in the front of Gloria’s house, at this point Mark began sloping the block 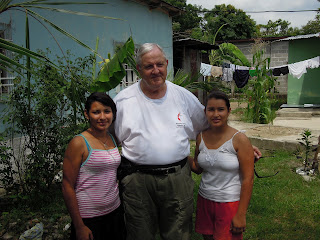 Arnold with some locals 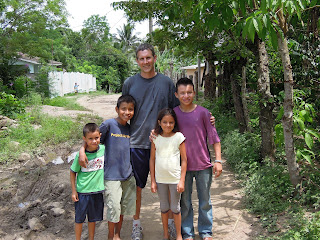 Jeff with some school kids