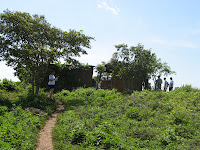 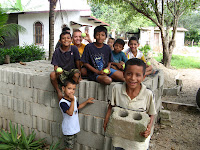 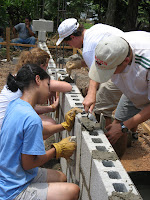 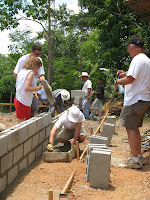 Dear children in the three and four-year-old Sunday School Class at South Aiken Pres,
I understand you have been talking about the mission of building houses. Mr. Bunch told me that you have been saving your offerings since Christmas to buy cement blocks to build houses in Honduras. You raised $50! I want to tell you what your gift has meant to a family here.
You have helped Miriam’s family. There are eight children that live in the house with her and her husband. They live in one room that is probably smaller than your bedroom. There is a dirt floor, and chickens run in and out of the house all day because there are no doors, just sheets covering the doorway. The children have no beds. The roof leaks and they all get wet when it rains. There is no bathroom, no tv, no air conditioning, and no furniture except for one small bed. The kitchen is outdoors
In Honduras, their money is called Limpera instead of dollars. A cement block costs eight Limpera. Your $50 bought more than 100 cement blocks. That’s enough to build a whole wall for their new house. Their new house will have a real floor, strong walls, and a roof that doesn’t leak. It will have a bathroom, two bedrooms, and an indoor kitchen and sitting area. Best of all, because of your gift and those of others who also gave money, Miriam’s family will know that you love them enough to give them a house and hope for a better life. They will know that God is using His children to help them.
When you go to bed tonight, look around your room and pretend it is Miriam’s house. Then imagine that some people you don’t even know love you enough to build you a house. Then you will know how God uses kids like you to show His love to all His children.
Gracias from Miriam’s family!
Blessings,
Beth Eberhard
P.S.
Do you know Donald Josey and Mike Lambert? They had a contest to see how many blocks they could hold on their stomachs. Donald won, with eight blocks! 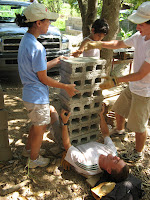