Last Saturday I discussed with Martha Thomsen the situation at the dump. Many children and adults scavenge through plastic bags, looking for food scraps and other items of potential value. I expressed to her that we have a strong calling to provide help to these people. She said that she was also concerned about this problem, and had gone to both her cousin the Commissioner and the Mayor to ask that the dump be fenced in and access-controlled. Since she then went back to Nebraska for a time, and nothing has been done in this regard. 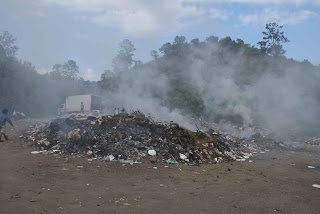 It was determined that it was now time to revisit this issue. She called a minister friend who came by, and we discussed the problem with him. He agreed to meet at 10:00 a.m. today (Monday) at the dump to assess the situation first-hand.

When I arrived at Martha’s home this morning, she had assembled not one, but four pastors to visit the dump. We prayed before we left, and such a prayer I have never experienced! There was a Power present in the room with us, as Martha, the four pastors and I were praying. We went to the dump and no one was there except for the dump keeper. He said people usually arrived later in the day, between 11:00 and 1:00, when the big dump trucks from the factories came to dump their stuff. He opined that most of the people who come live by the road between the dump and the bridge.

We left with a schedule to return at 11:45. When we returned, they were only 2 boys there, and they confirmed that they lived by the road. One of the boys mentioned that a pastor came and met the families on Monday and Friday evenings. One of the pastors with us knew him and called him. He arrived about 10 minutes later. He is the pastor of the Assembly of God church in Quimistan. He also has Sunday School for the children by the road, about 60, on Sunday morning.

He also is a dentist, and has a practice in Quimistan. His dental clinic is next to the church, and a block from the HAF office.

We have a meeting Tuesday at 5:00 to discuss how we might partner to help these families. PRAISE GOD, a ministry and a dental contact in one meeting!