Some of us have had the best day. Others have had a very rough day. 6 people in our group have gotten sick from an unknown source. However, the rest of us continued on in today’s projects.
We started today at Francis Bogram Elementary school where we taught more than 300 students how to brush their teeth. We gave each of them a toothbrush and toothpaste that were donated by churches, individuals and dentists from Canada and the US. God’s angels are everywhere! We also gave each of them a deworming and fluoride treatment. Our favorite parts were watching their faces as they tasted the banana deworming treatment and jumping back as they spit the fluoride at our feet! The kids were most excited about the stickers that they earned for “swooshing” fluoride for 30 whole seconds!! 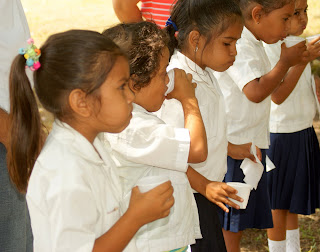 After lunch, we set out for the Agape compound to play with the Compassion International children. When we got there, the children were still in their classes so Jeff Ray, Abby Ray, Cecelia Newman, and Daniel-the interpreter climbed to the top of the water tower. From there, it felt like we could see all of Honduras. The mountains surrounding us felt like God’s arms embracing all of His beautiful children. As we climbed much slower down the tower, the children came out to play. We had SO MUCH FUN with them!!! Over a few hours, we played everything from kickball to futbol to having a massive water fight. We even managed to throw in a few manicures. Everyone left with smiling faces, happy hearts, and very pretty, sparkly nails. 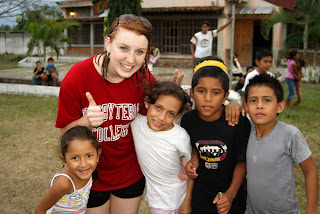 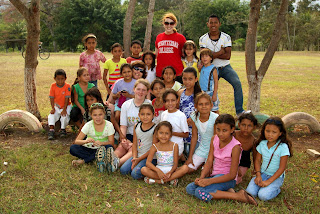 The fun continued as we came back to Sister Martha’s. Our team members enjoyed a delicious meal together and had a lot of downtime. Some picked on each other (Arthur), some played basketball with the locals, and some just hung out. As the night comes to a close, our hearts are about to burst with our strengthened love for the Lord, each other, Honduras, and Pepto Bismol.

Please pray for those still suffering from sickness tonight and for the continued health of those of us who are not sick. Gracias….