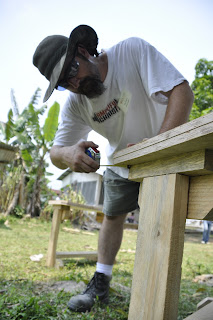 ¡Holá! from Honduras! This morning we went up an extremely curvy, bumpy, and dusty road up a mountain on the way to Tao (Texoxingales).  We went to “Tao” to build benches and to screen in a cooking area that the previous screening had withered away.  We arrived at the school and immediately were bombarded with kids of all ages with nothing but smiling faces.  After removing all of the wood from the classroom for us to build with, we set up a bench-building station under a big tree in the schoolyard. 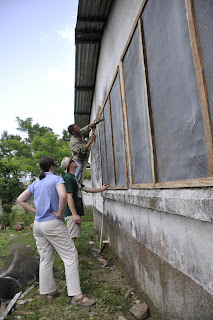 We all grabbed gloves, hammers, nails, tape measures and started our projects.  The bench team began to piece together the bench legs as the screening team ripped off the old screening.  Some of the children started holding the nails for us while we were hammering together the benches.  One side of the kitchen area had rotten wood around the windows that had to be replaced.  After a few hours of working and sweating, we started to see a lot of progress.  After taking a small break, the children gathered around and started making hats and boats out of old newspapers.  By this time, the screening was mostly done so Jim and Sarah began playing with the children.  While Sarah made hats (that were actually boats) with the kids, Jim took pictures and showed them. 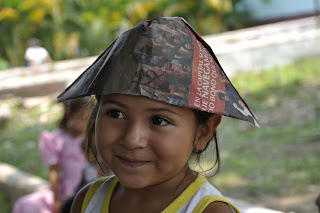 The children love seeing themselves on the camera screen!  Shortly after, both projects were finished and we quickly gathered to head towards the van.  The ride down the mountain was refreshing with a little AC, some water, bananas, and a PB&J!  On the ride down the mountain we arrived at an overlook and took a few pictures of the beautiful mountains and scenery.  As we arrived back to the ranch, we packed up and left for Santa Clara.  Armed with toys and a new ball pump, we arrived at Santa Clara and dropped off all the toys for the children.  It was a quick trip, but was just as satisfying.  We arrived home to the glorious smell of fried chicken and papas fritas (French fries)! A quick meal and devotion from Aaron and we are ready for bed.  We can only hope that tomorrow is as good as today, but we know it will be.  Our day tomorrow will consist of a ton of fun and fun times at a nice waterfall!  Who doesn’t like a waterfall?!