In an earlier posting, we mentioned that some of the men in the January team worked at the Jicaro School, building a new facility with three toilets and a shower. Here are some scenes from that work.

The school is also called the Republic of Venezuela School, as shown in these two photos. 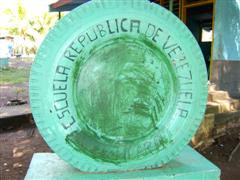 One variety of tree that’s found in the area is the jicaro tree. If you Google this, you’ll find that the jicaro is a beautiful but poor tree. It is strong and disease-resistant, needs very little nourishment to grow robust, and it thrives in places and under conditions that would be virtually impossible for any other species. As the old Mayan codes tell it, the jicaro tree grew out of the liberation of the people.

The jicaro tree has been uprooted from the good lands now dedicated to more profitable crops, and relegated to marginal zones where there has been neither infrastructure of any type nor attention to the human beings eking out a living there. The school is aptly named.

It’s a one-room school. This is the outside of the school looking from the bathroom facility. It has been painted recently, using funds from the Foundation and work done largely by people in the community. The local citizens are also working to finish a kitchen in an attached room behind the school. So they are willing and able to help themselves when given a hand up in the form of money to buy materials. 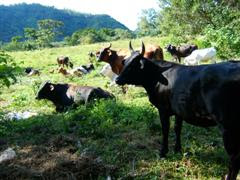 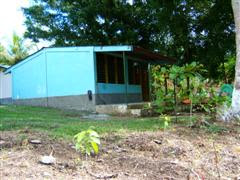 The school property is on the side of a hill, with dirt roads on two sides and cows on the other two sides.

The Honduras Agape Foundation agreed to fund the Jicaro School bathroom project after seeing the condition of the two existing toilets at the school, which are in the background of some of the photos below.

This is how the new building looked after the first day of work by the team. The real block-laying was done by Modesto, who is in the Agape church in Quimistan. The missionaries were guided in our efforts by Celvin, who is also in the church and was asked to be the project coordinator. 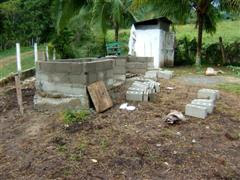 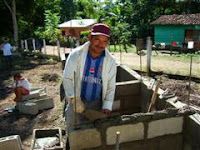 The blocks used for building in this area are somewhat like the cinder blocks we use in the United States, with some key differences. They are typically formed one at a time, in someone’s back yard, by shoveling from a moistened pile of cement and sand into a tabletop block-making framework. You have to see it to believe it. The blocks thus formed are carefully removed from the frame and stacked to dry. When dry, they are generally hard enough but quite brittle. They make a 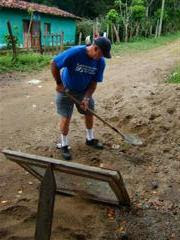 sturdy wall, but don’t lend themselves to being drilled or to holding things such as electrical boxes because they just crumble.

The missionaries did some of the grunt work, as you see Richard here screening river sand, and Danny hauling sand to the work site. 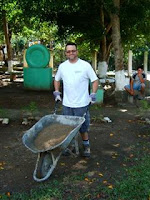 Once a few wheelbarrow loads of sand are stacked up, a bag of dry cement is poured onto it and mixed well. 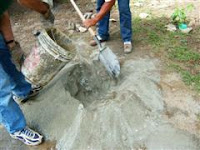 The mixture is then formed into a volcano shape and water poured into the middle. Then the dry mix is gradually shoveled into the water from the outside, working carefully to avoid collapsing the wall of the volcano before the mix is complete. 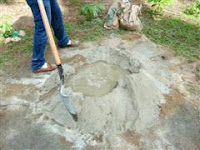 The well-mixed mortar is carried to Modesto for the block-laying, and after he has finished 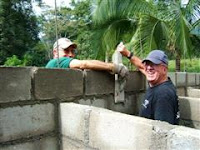 a course of blocks, the missionaries fill in some gaps with mortar to add strength to the wall. 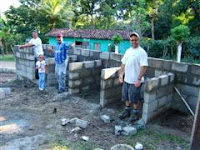 Slowly the walls go up. Then it’s time for the clean-up crew (also the photographer in this case). Check out the cool broom. 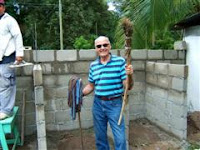 This final photo shows the walls up within two courses of being ready for the roof. You can tell from the smiles on the faces that it’s been a good day. The last day we were there, the walls were finished. 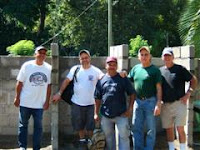