After breakfast the group separat 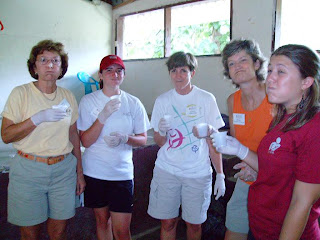 ed into three sub-groups. The first consisted of Roxanne, Andrea, Vanna, Brittany, Blakely, June, and Ken; they returned to the school to finish giving the older students fluoride and deworming treatment. June, Morgan, Andrea, Roxanne, and Brittany got up the courage to try the fluoride themselves. It was apparently an interesting experience.

The second group attempted to aid in construction of the two homes. However, they did not need everyone who was available to help. Instead of three people per each home, they only needed three total. Therefore, Joey, Mike, and George stayed while Kathy and Mor 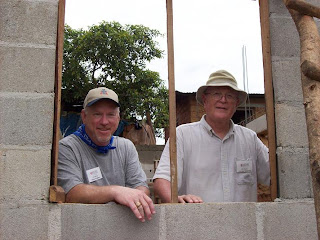 gan went to the school to help out the others. George moved cinder blocks at the first site and then went to help the second afterwards. Joey and Mike also helped around the site in whatever capacity was needed. After lunch, Sam traded job positions with Joey. The new group filled the cinder blocks with concrete. They say they’re feeling the burn now. George and Mike took a break for a brief photo opp.

After breakfast, Sam, Jenn, and I went up the
mountain to Pinal to assess a possible con-struction project for their school. While Sam and Jenn evaluated the situation, I played with the school children as they taught me “pica” and other playground games. They also loved seeing their picture displayed on the camera. I 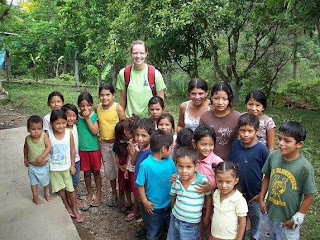 enjoyed getting my picture taken with the children.
After lunch, those who were not part of the construction crew went to the kindergarten where an eye clinic was set up. Half of the group tested the patients’ eyes, and the other half fitted eyeglasses for them. We were very busy the whole time. Blakely was particularly helpful taking blood pressure readings for those with a history of high blood pressure. Kathy and Arturo (in the background) aided a young boy with the auto refractor. 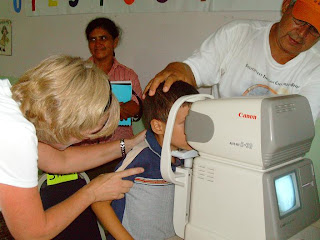 We then gathered around for dinner for some food prepared by Gloria from her restaurant. Unfortunately, a huge storm came up, so George and Arturo had to bring the food to the hacienda. After dinner, ten of us decided to attend a local church, La Cosecha. Despite the language barrier, we were able to get a good idea of what the pastor was saying due to his enthusiastic hand gestures. We were also able to talk over ice cream and soda at Shirley’s, a local convenience store, so that everyone knew what was said.

Overall it was a productive day. We are very tired due to our hectic schedule. Pictures will have to wait until tomorrow.