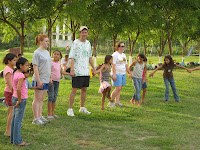 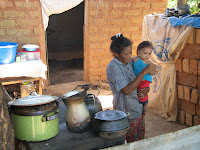 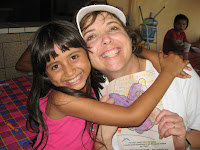 Today the reason we are here became evident.
This morning we split into three groups. Tyler and Michael Lambert went to La Escuela de Jicaro, a one room school for 30 students in grades 1-6. Before today, they had no electricity. Today, florescent lights burned in the room for the first time.
The second group of five youths led by Bob Prather went to the house I will call La Casa de Muchos Muchachos, because ten children live here with their parents. The house has two rooms: a sleeping room with one bed (remember, ten kids!) and an outdoor kitchen with a roof but no walls. Our group started leveling ground to build them a new house today.
I went with the third group to a site where construction had started on a house for another family. We were digging trenches for the foundation. To say these people are dirt-poor is an understatement: they don’t even have dirt, only rocks and smaller rocks. Our job was to dig the small rocks out of the ground in the trenches, which will be filled later with large rocks and concrete added. In between working, we would play with the neighbor children. One of the girls was having her sixth birthday today. I would have guessed her to be around 3-4 years old.
In the afternoon, we went over to the Agape Church compound to play with the Compassion children, several of whom were sponsored by us. While we were there, they were served lunch: a small bowl of black beans, a fried egg, a corn tortilla, and a drink. For many of the children, this is their only real meal of the day. One girl was there with her young brother, who wasn’t sponsored by Compassion. She shared her meal with him.
The children and our youth played many games this afternoon: Duck, Duck, Goose, Elbow Tag, volleyball, and of course soccer. All the while, relationships were being forged. Many of these children are starved for affection because their parents have large families and are struggling to survive. Today, they were lathered with attention and love.
This evening, after our meal, we reflected on the day. Michael Norton said it all, “We can’t do everything, but we can do something.”