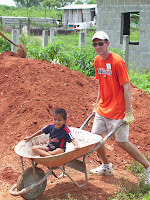 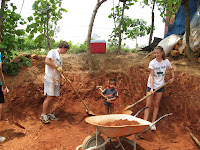 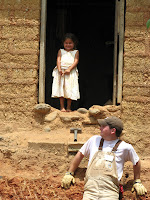 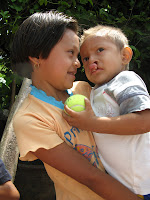 This morning we started at two sites, but ended up spending most of the time at only one. After arriving at the site of the second house, we passed out tennis balls to the children and gave the girl whose birthday was yesterday a Beanie Baby doll as a gift. Just as we started to work, we were told that we all needed to go to the first house, La Casa de Muchos Muchachos, because construction at the second house had to wait for materials to be delivered “manana.”

Soon we were hard at work leveling the ground at the first house. We thought we were making good progress until we realized that the trench we thought they were digging turned out to be the depth the whole site needed to be: at least another 18 inches. Each wheelbarrow load had to be taken to the dirt pile. It wasn’t long before the kids had made a game of it, taking a running start down the hill and then up the ramp to the top of the pile, the onlookers yelling out their scores. One of the little boys, a three-year-old boy wearing only a tee shirt, delighted in waiting at the top for a ride in the empty wheelbarrow back down. This little guy later picked up a shovel and did his share of shoveling dirt. Some of the rest of the ten children who lived here came down to visit. One little girl carried her little brother, who was about two years old. The little boy had a cleft palate, with his upper lip and nose split and his front teeth twisted around at a grotesque angle. His older brother appeared to have also had a cleft palate, but his had been surgically repaired, leaving only a scar on his lip.

We met Jenny, the 20 year old sister, who had a four month old baby. She surprised us by giving all the girls on our team gifts: rings, earrings, or fingernail polish. She seemed better off than the rest. Her baby was chubby and appeared in good health. Someone said they thought Jenny was sponsored by someone.

In the evening, we all dressed up and headed over to the Agape church for a youth group meeting. The kids played several games, including Musical Chairs and Pinata, heard the band play several songs, and then afterward went over to Shirley’s Restaurant for soft drinks and ice cream.

Observation of the Day: The difference between the life of a sponsored child and one who is not sponsored is night and day.