A long-awaited day became a reality on Thursday as the Samaritan’s Purse pickups pulled into the Santa Clara school yard. They came to introduce the community to BioSand water filters as a major element for reducing diarrhea, worms, and other water-related diseases that are endemic to rural Honduras.

We had been told on Monday to expect a six or seven man team from San Pedro Sula, so we were amazed to see about ten guys pile out of the trucks and begin preparing for the 2 PM community meeting. We learned early in the day that the power in town would be out all day, and we knew the meeting was structured with a PowerPoint presentation and sound system. But not to worry—this team has obviously faced similar situations. They started their portable generator and got everything together and working right on time.

Invitations and informal chats across the fence had alerted every family in town of the meeting. Experience from earlier community meetings made us cautious; in a bold assessment, we were able to have faith that as many as 30 people–maybe 40 at most– would show up within an hour of the announced starting time. But when the time came, we didn’t have 30 or 40. We had about 60. Within a few minutes, the crowd had grown to 70. Eventually the count was 92. Community leaders said this was a record turnout by far.

The presentation was an overview of the process used by Samaritan’s Purse of Canada when they bring BioSand water filters into a community. Their goal is to put a filter into every home in the community, and to get the residents of the community to build the filters themselves. This meeting was the first of a series, culminating in the beginning of filter fabrication by the community in July. Because of contributions to Samaritan’s Purse, they only ask for a nominal amount of money (40 Lempira, or about $2.21) for each filter.

Another interesting event in this meeting was the presence of Adolfo Leon Otoniel, Director of Community Health Evangelism (CHE) for Central America. Karen had arranged to meet him when we were in Copan last October, and follow 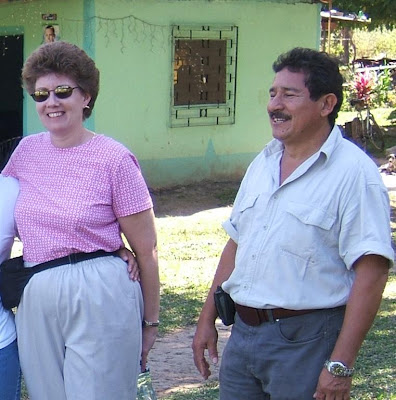 ed up with arrangements for him to be in Santa Clara this week. As we talked with him Thursday morning we asked him if CHE has had any collaboration with Samaritan’s Purse. To our surprise, he told us that the CHE organization has begun evaluating possible collaboration, and that was one determining factor leading to his presence at the meeting. He had come earlier in the day to walk around the village in order to assess general conditions of the town considering the possibility of introducing CHE concepts of pure water, hygiene, and public sanitation—all within an evangelistic framework similar to that of Samaritan’s Purse. So this was an excellent merging of similar efforts, all aimed at improving the health situation in Santa Clara—both the physical health and the spiritual health.