Hola! I have decided to be blog queen tonight as we are stuck in the house due to a terrential downpour. In fact, it has rained nearly every night we have been here. We are not complaining though because the clouds keeps the temperature down! Something the morning constuction team was very happy about. 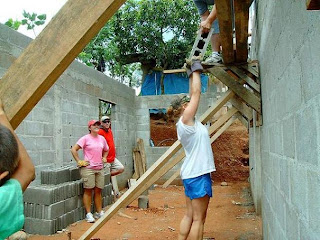 Mike, George, and Sam along with Kathy, Blakely and I (Brittany) went to home site 2 this morning for construction and a little play time with the kids. Try as I might, I couldn’t seem to find a picture of the men working (although I’m sure it did occur). Blakely and I were goaded into a fitness challenge and found ourselves hoisting “bloques” up to the brick masons on the scaffolding. The other most common request–“cemento” allowed Kathy to earn her keep. Sam demonstrated his uncanny ability to summon rooster crows from all over town. If only I could post sound bytes… 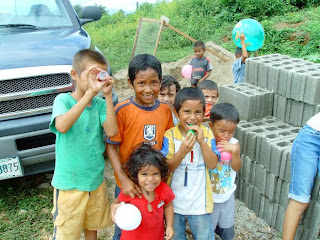 There are close to 15 children who live in or very near the home, and every single one of them loves balloons! There were Bombas, Bombas, Bombas everywhere. As many of these children were barefoot, we also made a game of tracing their feet on notebook paper to estimate shoe sizes. Kathy was then able to return after lunch with donated shoes that fit the children that needed them. This home site is in its final stages as work on the roof will commence tomorrow. 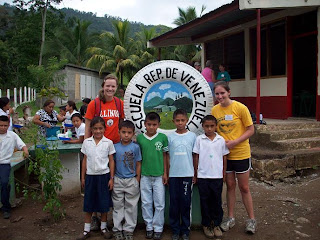 The other members of our group—sans Ken and June who flew out this morning–traveled to Jicaro school to administer anti-parasitic medicines and fluoride. There are 24 students at that school, 22 of which were present today, and they span grades 1-6. In previous trips, the foundation helped to complete a row of bathrooms and security bars on this site. After fluoride, the group travelled to a kindergarden in Pinalejo to assess opportunities for future projects. 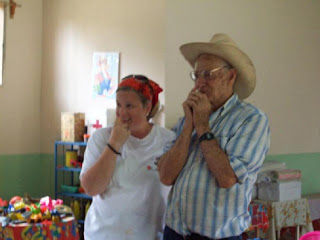 The eye clinic was open again this afternoon and around 45 patients were seen. There was some confusion during the set up which caused a pile-up of anxiously waiting patients at the door. Pablo’s bilingual skills were very helpful in organizing and calming the crowd. After the initial bump, things moved well. The photo shown on the right is of a particularly thrilled gentleman who needed some very strong glasses. When I put them on him and Jen asked if he could see the letters of the eye chart, it was hard for us to distinguish his answer amongst all the giggling. I have found the eye work to be particularly rewarding as gratitude is shown through wide eyes and smiles.
We had a leisurely dinner and a lot of time for group fellowship this evening.
Hasta Manana!
Brittany Klein