Both groups left to go to Gloria’s house to see the progress that was made. Then the school group headed to the school.

The school group had a slow start. The girls played Frisbee with the kids, while the guys shoveled dirt. We made cement to start building the kitchen’s storage room. By the end of the day a lot of cement was made to mortar five layers of cinderblocks. Several buckets of cement had to be carried to work on the top of the building. We hung out more with Christian, getting to try a whole bunch of new fruits.

We left work a little early to make sure we made it to the “Walmart” before it closed. Anna and Abby completed the mission to buy shoes for Oscar. 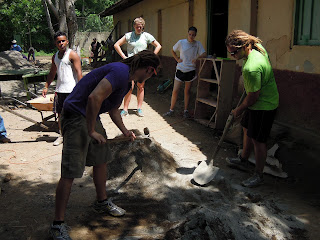 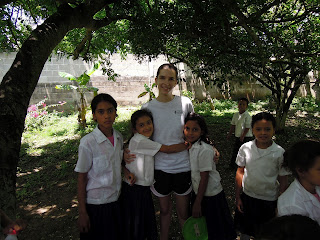 Anna with kids at the school 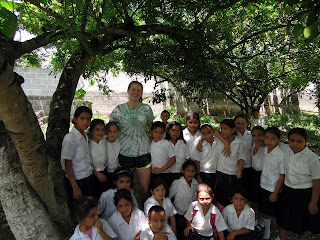 Abby with kids at the school
The team at Gloria’s house, which, just to make clear, consists of Mark, Jerry, Stanley, Brad, Aaron, Jennifer, Cooper, Lorie, and Alex, continued laying block today.  Most of the work centered around the front of the house where the bathroom will eventually be, but the footers were dug and the ground layer of block was laid behind the house as well, which Jerry headed up.  The team worked in shifts mixing concrete in the blazing sun.  Mark laid over 90 blocks today, measured, and leveled.  Jennifer and Brad – Two Working As a Team – worked as masons packing in mortar between the blocks.  The process is slow, but we’re making headway. 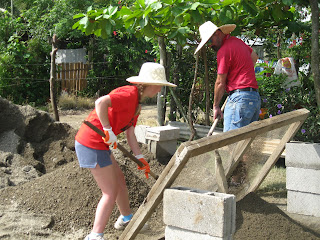 Lorie and Mark are sifting gravel in this picture.  Before the concrete can be mixed, the gravel has to be sifted to weed out rocks, to smoothen the mortar.  This is the “old world” way of doing this. 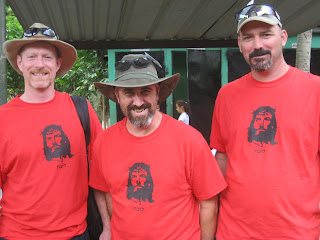 None of what we’re doing would be possible without these three.
The following pictures show the latest stages of the evolution of the wall: 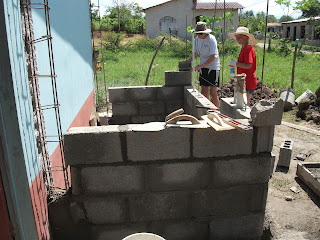 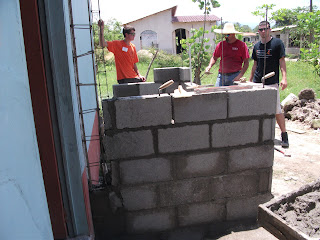 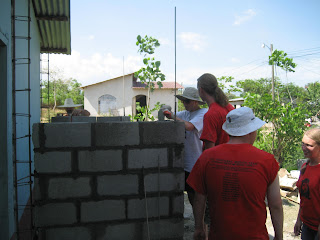 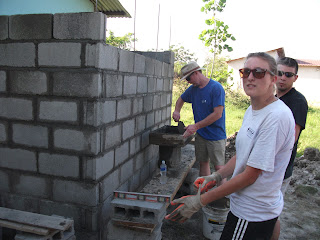 The wall has reached the point where we’re having to build benches to stand on, since the masons at work can no longer work on both sides of the wall due to its height.  At some point a door will have to be constructed via demolition from the inside of the house to create an access.