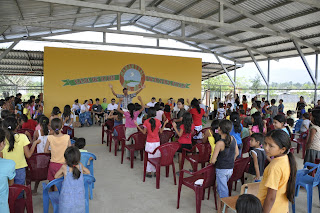 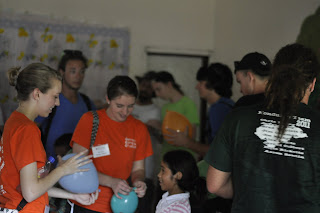 Following a brief, but delicious, breakfast prepared by our wonderful cooks Sandra and Gloria we packed up and headed out to Martha’s Sunday school.  Once there the children greeted us with several well disciplined songs as well as a few solo performances by some of the braver children.  After joining in with the children in singing a few collaborative and interactive songs we performed a short skit.  In the skit, members of our group acted out the well known story of the good Samaritan which illustrates the values of compassion and sacrifice.  Following the skit we helped Gloria distribute her homemade lunch to the children.  After they had finished their lunch the children were ready for playtime!  Alex, Joe, Dane and Aaron quickly volunteered to join in on a soccer game that some of the young Honduran boys had started.  After only a few minutes we realized that we were extremely unprepared for what was to be a royal butt whooping.  The intensity of a Honduran midday sun and the surprising skill and athleticism of the young Honduran boys quickly had us panting and sweating harder than any of us could recall.  And while we were out playing soccer, the other members of our group played several games with the children.  After about an hour and a half of playtime it was time to say goodbye and head back to the ranch for some lunch.  Following our lunch we had a short period of rest before we piled into the vans and headed back out to help Vilma, an Agape promise volunteer, feed and entertain a group of children known as the AP group or Agape Promise children which have been sponsored by individual citizens from the U.S.  We fed them a light supper of quesadillas gave each of them some well deserved candy.  After the kids had finished eating we went out into the courtyard and played several games with the children involving Frisbees and hacky sacks.  After a few hours of fun it was again time to say goodbye.  So we reluctantly departed and headed back to the ranch for the night.  So in all it was one big day of fun!
Alex Stutts