On this day of departure for six of our team, we observed communion conducted by Martha. It was a very moving ceremony. We discovered that God reaches out to us regardless of the setting. The wine was jamaica juice, the bread was muffins made by the women in La Montanita, and the cloth covering the bread was a tortilla cloth made by the women in La Montanita. At the end of the ceremony, each of us was asked to relate the gifts we received during our experience in the Quimistan region

The remainder of the team traveled to Milpa Arada, which is about 20 minutes from Quimistan, to attend the dedication of a new municipal water system. IHDER (Honduran Institute for Rural Development), which is the NGO that we met with earlier to discuss their long-distance learning project, funded the majority of this project.

Milpa Arada was established about 300 years ago. It was so isolated that the first and only school they have was established in 1946. In most of the past, women and children had to walk to a water source which was a 45-minute walk each way. They carried the water back to their homes in buckets on their heads. Sometime in the late 1900s, a small water line was run to Milpa Arada from Pinalejo, but the line did not have enough capacity for the 250 houses in the village. In 2003, planning began on a higher-capacity water system. After many obstacles, the project is now complete. A 6-inch line was run the 7-km distance from the water source to the village. All of the 250 houses now have running water. Also, the system has enough capacity to meet their expected growth for the next 20 years. The system has the capability to add chlorine, but the water is pure and does not need chlorination. The project cost about $200,000.

The dedication ceremony lasted about 2 hours. Several of the speakers had tears in their eyes as they expressed thanks for the water project. At the end, a group of young women and men entertained the crowd with some traditional dancing, and there were fireworks.

We heard a comment from a woman that we believe is very applicable to our projects here. She said ”We extended our hands to reach out for help and we got what we needed. If this water line ever needs additional money, we should put our hands in our own pockets”. 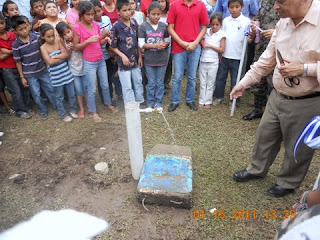 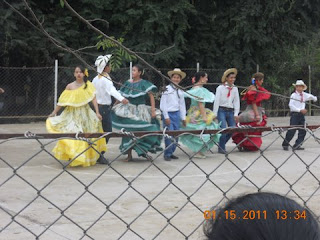 Late in the afternoon, six AP kids met with their sponsors to spend some private time playing games and to receive gifts that the sponsors had brought. There were many hugs and teary eyes when the kids had to leave.