The whole group returned to La Montanita on Monday to help the locals complete the school desks and benches, start the Justa stove project, conduct a dental hygiene clinic, teach a group of women how to make various crafts for them to sell, and assist Dr. Elsa conduct a personal hygiene clinic.

Justa stove
We installed their first Justa stove today. This stove is an efficient, wood burning unit that is totally vented to the outside. Omar, a previous recipient of one of these stoves, assisted us by building one for a resident of La Montanita. He concurrently trained some other residents. On Tuesday, our plan is to install a second unit in another home. This installation will be done by the local residents under the supervision of Omar.

The enthusiasm and work ethic of the residents of this village are exciting and encouraging.
George 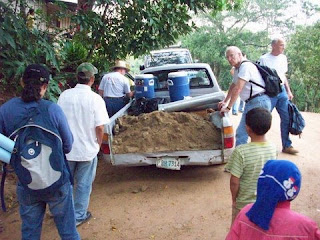 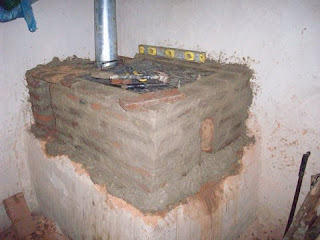 School Desks and Benches
When we returned to La Montanita this AM, we found 10-15 residents eagerly waiting on us to bring more nails so they could continue assembling the desks & benches. They took the nails and enthusiastically took complete ownership of this job. Some of us started sanding the finished desks/benches and other residents showed up and joined in to help with this. This whole job would have been completed, but we ran out of nails again!! We will take more nails Tuesday AM.

While Allen was carrying out his board president duties (walking around inspecting!), he saw a group of men & boys complete a desk, set it on the floor, and give it the “wobble” test. Well, it failed the test. Then, they disassembled the desk and reassembled it, and it now passed the “wobble” test. We were pleased that this group had taken great pride in what they were doing.

… And they came to the mountain on a horse
As we finished the dental hygiene clinic, two little girls (ages 11 and 6) came up the hill to the village school riding on a horse. They jumped off their horse uphill from the school and conferred. The older girl being a bit reluctant sent her younger sister down to the group of North American missionaries. The girls had heard that the team was giving away toothbrushes and they wanted some for their family. They had ridden the horse for an hour down their mountain and up the mountain to La Montanita. Surrounding the little six year old with love, we learned the family’s sad story. Just after the 11 year old was born, her father abandoned the family. The mother eventually remarried and when the 6 year-old was 14 months old, her father was killed by a gang in San Pedro Sula. The mother again remarried and her youngest child was born. The mother could not accompany the two girls on their journey as she had to care for her son and the flock of newly born chickens. When we demonstrated the correct method of brushing and flossing, the six year old related that she knew how as her mother had taught the children. Finally, after meeting with the children’s grandmother who lived in La Montanita, the two girls mounted their horse for the hour’s ride home – a home on the next mountain top with no electricity – a ride the girls made twice a week to their grandmother’s during the school year. The team was amazed by the beauty, intelligence, and presence of the six year old who held intelligent and thoughtful conversations with adults she had never met before. There were lots of teary eyes during this encounter. 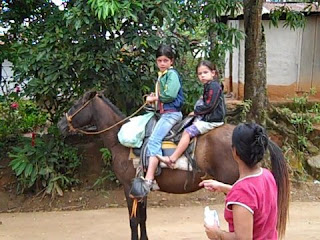 Personal Hygiene..the road to better health
Today Doctor Elsa gave the first chat on personal hygiene to the women of La Montanita. Eleven aspects of personal hygiene were discussed such as skin care, hair (checking for head lice) and ears. Many old remedies were questioned. The Doctor assured the women that brushing a cat’s tail over sore eyes won’t cure the problem.

Our team cheered as she reinforced the importance of dental hygiene and encouraged the moms to set a good example for their children. Doctor Elsa closed with words we all love of caring for one another and helping where needed. 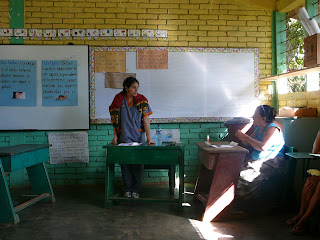 Some thoughts about Honduras
We have been very busy and have met many wonderful people. It has not been all hard workt hough. This is an amazingly beautiful place. Imagine sitting at breakfast with a view of hibiscus blossoms and hummingbirds. As I write this I see a flock of cattle egrets. The mountain views are glorious. Two very friendly and capable women prepare our meals and do our laundry. The people here may lack many of our material possessions, but they seem full of joy.

Such a meaningful experience for us.

Mountain Crafts
Yesterday in La Montanita we were very pleased to have more than a dozen women & girls come to show us some of their handiwork – some embroidery and some hand sewing. They were quite interested in learning to crochet. We had some crochet hooks with us and were fortunate to find some acrylic yarn in Quimistan (35 cents for enough to make one baby cap). We found our pupils were fast learners and very interested. They told us they wished to learn to make artificial flowers and things they can use to decorate their homes so we are looking for supplies and ideas. Lovely, friendly folks to work with. 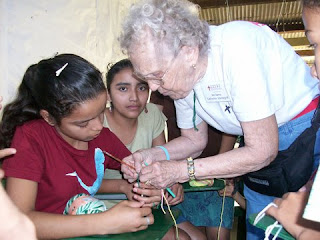 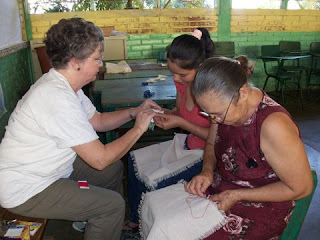 Dinner with Martha
We had dinner with Martha on Tuesday night. She is the” hostess with the mostest”. Due to her kind hospitality we are sheltered and fed in luxurious surroundings. We have flowers in the yard, a soft bed in which to sleep and lots of good food and company! She is a remarkable person. As she related to me. She grew up barefoot and with one dress that she washed every night so she could attend school. She witnessed a relative who was assinated in front of his home for being of the wrong political persuasion. She was able to come to the U.S. because of the sponsorship of an American family. At that time she was marriend and pregnant with her fifth child. Her husband and children stayed in Honduras. They later divorced. Her fifth child was born in the U.S. She lived and worked for many years in the U.S. Subsequently she married an American man and settled in California and brought her four other children to live with her.

They returned often to Honduras and Quimistan. After they semi-retired they decided to return here to live and bring Christ to the people by helping them to help themselves. The reason she shows Christian missionaries such kind hospitality is that as a missionary to Honduras she was sleeping in a card board box and it was so cold! 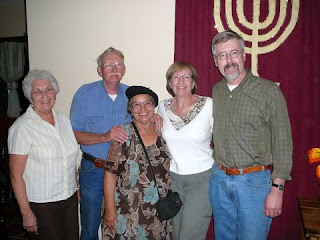 Martha is the Honduran woman and her husband is behind her.

Drinkable Water at Last!
How do you feel when you help save a baby’s life? We got a little taste of that feeling this week.

Water in many areas of Honduras is contaminated with E. coli, a primary contributor to gastrointestinal disease, diarrhea, and dehydration that cause many infant deaths. One of our health initiatives has been to identify contaminated water sources in communities in our mission areas, and to help the communities overcome the problems.

This week we tested several water samples from two mountain communities of 300-400 people each—La Montanita and Santa Clara. We used field test kits that show clearly in 24-48 hours whether a water sample contains E. coli, and roughly how much. 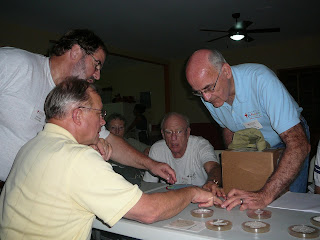 Water samples tested in La Montanita were all completely free of E. coli—veritable “pure mountain stream water.” Those results confirmed results from months ago. The president of the La Montanita Water Board was pleased to hear of the results. We even kidded about how he might be able to sell their pure water.
Results from Santa Clara showed dangerously high levels of E. coli in their community water system, again confirming results from earlier testing. The photo below shows on the left side what one family with nine children used to drink from a little spring at the bottom of the hill.  The two middle petri dishes show what they were drinking after they got tied in to the community water system.  The purple spots in each of the three petri dishes are E. coli colonies. 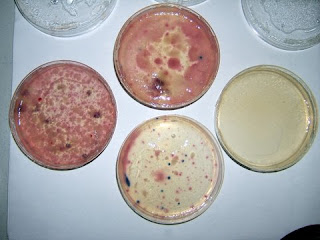 But here’s the good lifesaving news: Following that earlier testing in Santa Clara, contributions from various Foundation-related donors enabled three men of the community to build and install more than a hundred biosand filters (BSFs). Every home in the community now has a BSF.
Yes, the community water system may be loaded with E. coli. But after that water passes through the BSF, the E. coli has been removed. The petri dish on the right of the photo is water that was collected from the BSF in the home of the nine children.  None of the samples from the BSFs showed any sign of E. coli.
But what is the real test of whether we have been successful? How many kids now have to be carried to the hospital for treatment of extended diarrhea and dehydration? We were told that since the BSFs were installed in early November, there have been zero instances! How’s that for dramatic evidence? What a terrific feeling!
There are lots of ways to show God’s love and care for the people He loves. The people of Santa Clara are seeing some of that love. And so is our team. It’s tough to be silent about stuff this good.