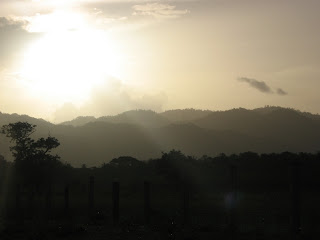 Well, today was our last full day in Honduras.  Sadness has settled in, but we are going to power through it.

Today we set out to place a Bio Sand Filter in a home in Tejeras.  When we arrived, we (luckily) realized that the sand had NOT been washed yet – a major catastrophe had been averted.  While George, Maynor, and Pastor Wilmer stayed at the house, placing the large and small gravel in the filter, Justin, Jenn, and Kandace headed back to wash the sand that had been prepared.  After washing it, we spread it out on a tarp to dry in the sun…. except the sun wouldn’t cooperate.  It quickly became overcast, and a rare mid-morning shower hit.  We were not deterred; we moved the tarp to a covered area and brought it back out as soon as we could.  We stopped to eat a quick bite of lunch of delicious tacos (what would be called “flautas” in some parts of the U.S., but I am told that in Mississippi, this dish is pronounced “fa-lu-tas”) and proceeded back to the sand.  After gathering up the sand, we headed over to the house to place it in the filter.  We were VERY short in our estimate, so we dashed back to sift and sift and sift (and wash) more sand.  It was quite a process, one that makes us very carefully consider what may be in the sand at the beach! 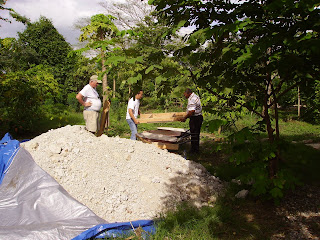 After speed-sifting (thanks to Justin, Maynor, Pastor Wilmer, and George) and power-washing (thanks to Jenn), we raced back to the house to place the rest of the sand.  We did notice that the water started to run more clearly, which made us all feel much much better. 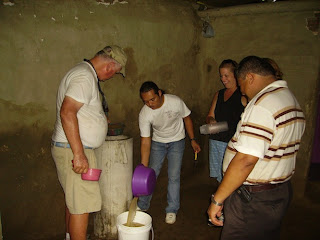 While we were all madly running about, finalizing everything with the sand, Kandace bravely volunteered (or was volunteered; the details are a little murky) to wash Enrique the Expedition.  Now, if you have watched the video we posted yesterday, you know what a task she had ahead of her!  Her job was interrupted several times by our need to use the car to transport sand.  But she was not easily deterred, and Enrique was a gleaming sight within an hour or two.  After another rain shower honored us with its presence, Justin & Jenn & George came over to help with the arduous task.

After dinner, we returned to the Vasquez home to do a chlorine disinfecting wash in the output tube.  Even though Justin looks like a miner in this picture, we needed his light to see, because the lights at the home are not very strong. 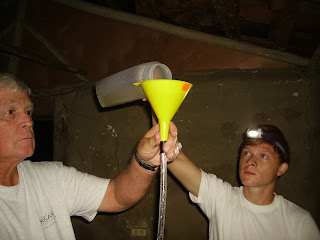 After convincing Sra. Vasquez to pose for the picture: 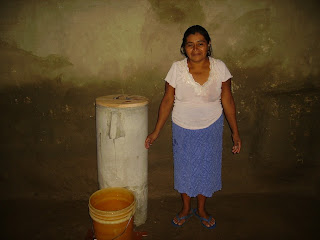 (her protest: ¿los niños?, meaning she’d rather have them in the picture than herself – can’t most of us relate to that? :)), we bid her good night with a prayer and she again expressed her gratitude to us for the filter.

All in all, a fantastic end to our July Honduras adventure!

Thanks for keeping up with us – we are returning to Atlanta (and eventually Beaufort, SC)/Houston/West Point, MS tomorrow!