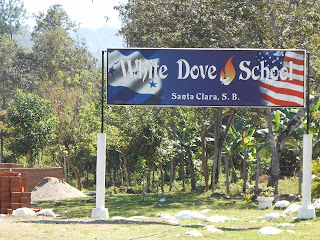 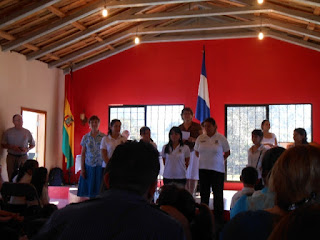 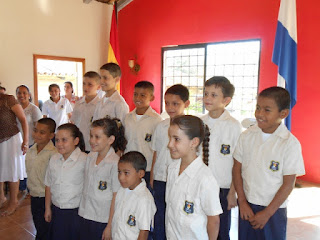 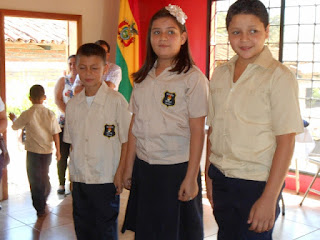 Blown away!  That’s what we were this morning when we joined the ceremony opening the new school year at the White Dove School in Santa Clara.  More than 60 students were there in their uniforms and eager countenances.  One of the teachers served as emcee, speaking both in Spanish and English for the standing-room-only crowd in the multipurpose room.  Following an opening prayer in unison by the students and the school director, the student body led the audience in singing the Honduran national anthem and the pledge of allegiance to the Honduran flag.
The school director explained the purpose and principles of the bilingual Christian education offered at White Dove, where the motto is “The White Dove kids are high level leaders that will transform Honduras . . . .”
Then Allen described how the “Santa Clara miracle” has developed from six little kids sitting around a little rickety table on Lencho’s porch, to what is now a trilingual school (Spanish, English, and French) of 65 students in pre-kindergarten through 4th grade–and adding another grade level each year.
It was an emotional recollection of how he has watched the development of both the student capabilities and the physical facilities at White Dove.
The teachers were then introduced, including Melanie M., who arrived last week with her husband Richard to teach second grade for the first three weeks of school.  The point was made that the school still needs an additional teacher, and a second one after Melanie returns to Starkville.
At the completion of the school-opening ceremonies, the team wrapped up our morning by manning our routine hygiene stations–handwashing instruction, anti-parasite treatment, toothbrushing, and fluoride rinsing.