This blog covers the events of yesterday.  Internet went out last night on the ranch because of a storm, so we couldn’t post it until today.


We woke up and headed out to do Bible School at two different schools. First we went to Nueva Esperanza, where the Wilkesboro group roofed three school buildings last year. We all piled into the back of two sketchy pickup trucks to take the hour and a half journey up the mountain. After the hot, dusty ride, we made it safely to the school. We played with the kids for a while and then started the Fruits of the Spirit Bible School. All the kids came together for an opening program, then they divided into two groups to travel to the four different stations: games, drama, art, and music. Brad, Alex, Abby, Jerry, and Stanley did arts and crafts, where they helped the kids color a picture. Brad went to sleep: 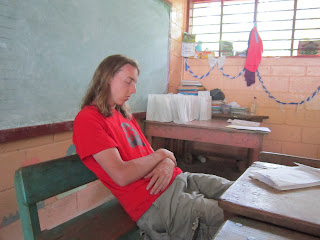 Dane, Anna, Jennifer, Lorie, and Maynor assisted with games. There were three different games: one with a towel, ball, a balloon, a sack race, and freeze tag all teaching the kids about patience. Josylin and Cooper sang and danced with the children in music.
In drama, Jarred, Aaron, Chris, Joe, Arnold, Daniel, and Mark told the story of Jesus healing the paralyzed man. They had the children act out the story and asked them questions about the story. Sam was the bell between each of the activities by making the rooster crow. After the kids cycled through all of the stations, everyone sat down for a lunch of chicken and rice served by the teacher. We packed up and headed back down the mountain to do Bible School at the second school.

Nueva Esparanze is about an hour and a half from Quimistan. It’s up in northeastern Honduras close to Guatemala. The journey to and from is a long, tedious one. The road is curvy and covered with potholes, and it’s very narrow so cars can have trouble passing each other sometimes. On the way back down the mountain our group happened upon an accident that had occurred a matter of minutes before we arrived. We’re not sure of the particular details of the accident, but we do know a pickup truck had flipped multiple times before hitting a bank. The truck had been carrying three or four people in the back of it, most of whom had minor injuries. One man had a broken nose. One woman was in pretty bad shape with a crushed leg… they rushed her to the hospital just as soon as the first of us arrived on the scene. But we were more or less the first responders, and as soon as our group arrived we immediately found a first aid kit (Scotti Stevens would be proud) and some of us began doctoring wounds and passing out bottles of water to all the people that had been involved in the accident. Considering the nature of the accident, wounds were fairly minimal – a lot of scraped elbows and some hits to the head. The people involved were lying in the road and beside it, some in a daze, trying to come to grips with what had happened. It easily could have been much, much worse. The man driving the truck saved a lot of lives by steering the truck into the bank rather than toward the drop-off on the other side of the road. It wasn’t a pretty scene, but our group’s response wasn’t a surprising one. Chris Lakey was very proud today. This group has worked and sweated and fought and cried and grown up together over a lot of years, and our response reflected that. 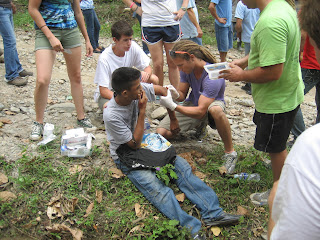 Jarred helping a kid involved in the accident

After arriving a little late to the second school, due to the accident, we started our second round of VBS. This time we divided the children into four groups and did the same rotation as described above. This VBS was done at the same school we’ve been working on over the past six days.