Today construction began.  One team worked at Gloria’s house, the other team worked at a school building (its location is unbeknownst to us).
As for the team that worked at Gloria’s house, the first thing we did was stake out and measure an area for concrete to be laid.  Two additions are to be added onto her house.  One is in the front, where a bathroom will be added.  The other is in the back, where a pila/wash area will be relocated.
After we measured and staked out the footers with fishing line, which we used as batter string, we began to dig the actual footers with shovels and pick axes.  They had to be 20″ deep for concrete to be poured into.  We wired together five rebar frames to put in the trenches, and to lean up against the wall of the house, as reinforcements.  We knocked the stucco off the block wall so the mortar will stick when we lay the block.
Aaron and Jennifer destroyed an already existing pila behind the house by smashing it with a sledgehammer and breaking up the concrete, which we had to haul off.
Finally, we spent the later part of the day mixing fast-setting concrete with water and gravel.  This is the old school way of mixing concrete, and it’s super labor intensive.
Stanley and Aaron mixing concrete 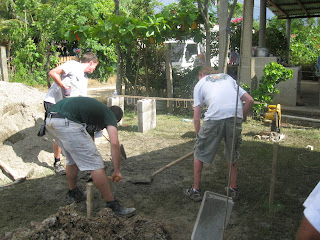 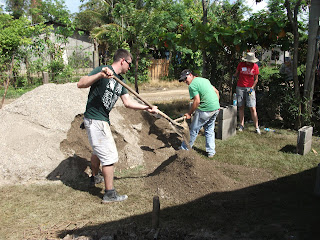 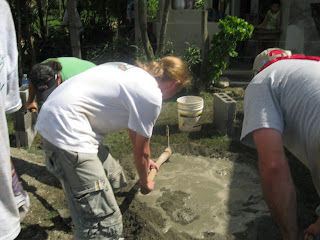 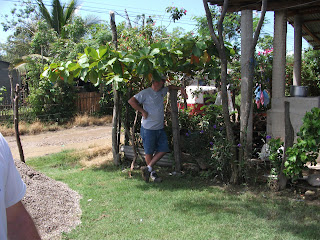 Mark is a valuable asset to our team 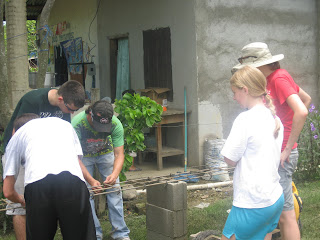 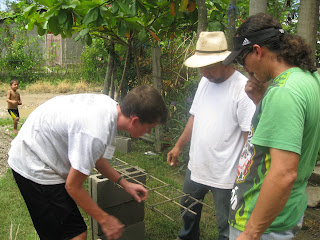 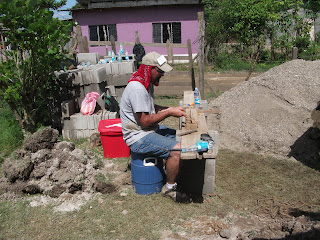 Mark bending supports for the rebar frames
As for the team that worked at the school building… their job was demolition.  They took off a tin roof from the school kitchen so they can put up a new one tomorrow, they knocked out a mud stove, knocked out a pila, moved a lot of dirt and rock, and removed stucco from around the house.  When they knocked out the pila, they hit a cockroach nest, which had hundreds of cockroaches in it.

The principal of the school cut down some coconuts for them to eat.

Jeff and Abby played volleyball with some of the kids during their lunch break. 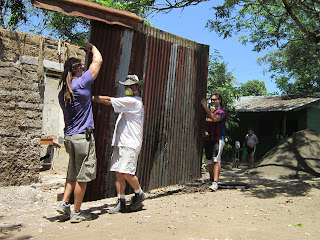 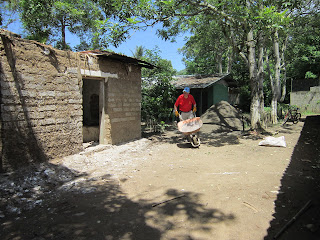 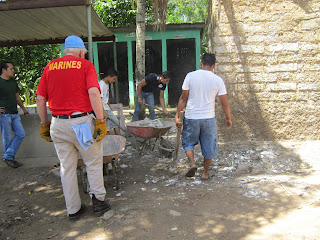 Moving dirt and rubble
They took down a bees nest that was full of honey, which all the locals ate.
Sam played with a scorpion: 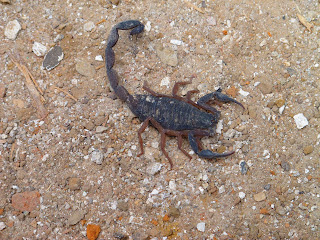