Thursday we were swarmed by smiling kids looking for hugs.  What a great welcome we received at White Dove school in Santa Clara!  Following the pathway lined by a block-long chain of whitewashed rocks alongside the road, we had parked and climbed out like clowns from a car in the circus, to be welcomed by Suyapa.  The students who were there on the last day of exams behaved politely and with discipline as they are being taught, but they simply were not able to withstand being picked up and hugged and tickled and loved. 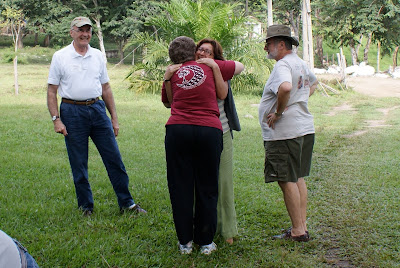 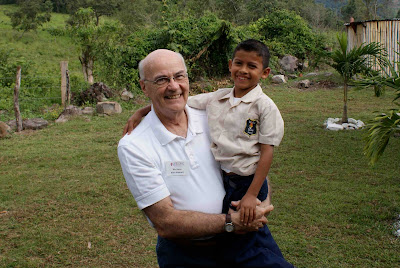 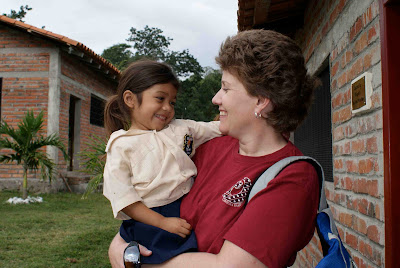 We saw the construction underway on the bathroom and the third-grade classroom which both should be completed before the next school year begins in late February.  Of course Lencho was there, diligently laying brick.  We marveled at the added landscaping which gets better at each visit, and noted the added covered porch at the entrance to the multipurpose room that is quickly becoming a veritable community gathering place for all sorts of meetings and events. 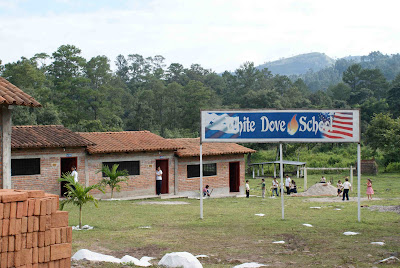 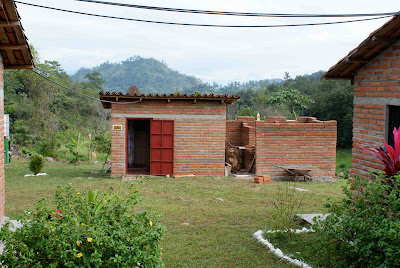 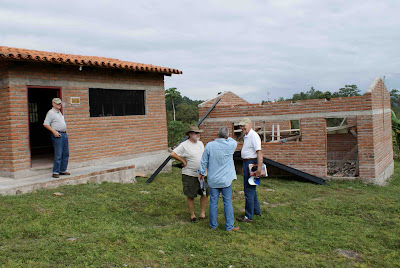 After hearing the story of how Channel 6 out of San Pedro Sula had shown up one day to take a few shots that might be part of a larger story of the five White Dove schools being started up around the area, we were able to view the more complete story.  The “few shots” turned into a complete video clip for the evening news, easily generating such a flood of calls from viewers that the station was pleased to re-run it later for those who missed it.  Those of us who have witnessed how this ministry has grown from a few kids around a rickety table on a little porch, to this little bilingual elementary school with 35 students could be excused for exhibiting some tears welling up as this little video vignette went along.  It’s not difficult at all to envision a future in which some of these kids have become leaders in their country, having the background of a good education, good moral and spiritual grounding, and an obvious love for their country and their people who still need good leaders.
We had a lengthy discussion of needs at the school—such things as a fourth-grade classroom, curriculum books, an office, computers, and even North American teachers!  We discussed how the school includes simple meals for the students—two meals every school day.  We talked about the possibility of student sponsorships for the elementary school students as well as for eight students who graduated from the Santa Clara public school and need help to attend the colegio school in Pueblo Nuevo, grades 7, 8, and 9.
But where did “dragging shoes” enter the picture?  As we were leaving Santa Clara, we heard strange noises from a rear wheel of the vehicle.  After carefully limping back to the ranch, Daniel took the car to a local mechanic who confirmed that a parking brake shoe had come unbolted and was dragging intermittently on the brake drum.  A simple fix was done, and the team is ready to go again tomorrow, to La Montanita and other spots yet to be named.
Allen