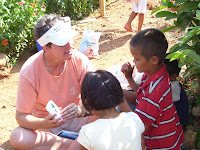 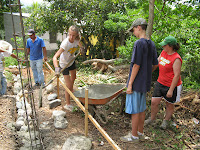 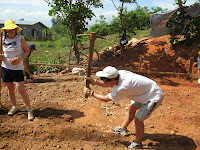 Another day of hard work in the hot sun, but progress is being made. At site #1, La Casa de Muchos Muchachos, we finally finished leveling the site and today we started digging the trenches. Although the ground is rocky and hard, it is not as bad as the ground of the house they did last year, so they tell me. The rocks were delivered today, so possibly tomorrow we will be ready to put the rocks in their place around the trenches. Progress on the second house was evident as well. The stones were placed in the trenches and concrete was poured in and around the stones.

Most gratifying to me personally was progress I saw in one of the children. Franklin, a boy of 11, was not in school yesterday. When we asked why, his mother said (as best as we could understand) that he wasn’t learning how to read or write so his mother thought school was a waste of time for him. Yesterday, I played a game of addition flash cards with his younger sister and him. He had trouble with the simplest of facts, so when our time was done, I left the cards with him. This afternoon, I took out the cards again and played the game. This time, he knew quite a few of the addition facts that he had struggled with yesterday. He had been studying! He is still far below what he should know, but progress is progress!

The evening ended with dinner at Gordida’s restaurant and an “Un-talent” show by the team members. Although I thought Eric should have won for his rendition of fingernail clipping, the judges said that Sarah, Christa, Marycruz, and Cecelia’s group had the most “un-talent” for their song and dance routine. Progress in all areas today: on the work site, with “our” children, and in our relationships with each other and the Hondurans.