We finally made it to Teo on Sunday. The 1.5-hour drive up the steep, unpaved, muddy road was not fun at times. For some of the team who had visited Teo during the 1/2010 trip, we were very pleased at the warm welcome that we received. Last year, the people of Teo mostly treated us as strangers. 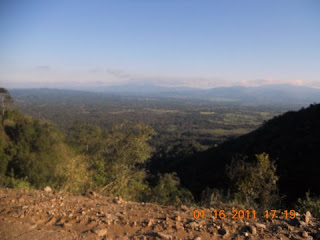 A Miracle in Teo!

We visited Teo in November.  One of the things we wanted to discuss was education beyond the 6th grade.  A meeting was held with the six 6th grade graduates and their parents.  We explained the importance of education and the role it plays in changing their lifestyle.  An offer was made to send several of their children on to seventh grade.  After much discussion, and several excuses, we determined they were not interested as no one has ever done that before.

In our visit yesterday, two men asked to talk with us.  They both were fathers of this year’s graduates.  Two additional parents showed up.  They wanted to talk to us about sending their children on to the 7th grade.  Juan Jose joined us.  After much discussion, they agreed to provide the transportation (about one hour and fifteen minutes each way).  HAF would pay for the gas, books, and other fees.

The village will select 3 children based on grades and ability to succeed.  The end of the story is 3 children will be going on to 7th grade beginning in February.  God is truly good!

We set up operations in the elementary school after touring part of the village.  We used one classroom for de-worming, where we served approximately 110 children and adults.  Outside, we set up the stations for hand washing, tooth brushing, and fluoride treatment.  Additional people came to the last three stations.  We were very encouraged by the patience of the children and adults waiting in line to be treated, as well as the parents participating along with their children.

At the end of the day we held a “who has the best teeth contest”, complete with prizes.  Groups of 10 children were examined.  Finalists were selected and a winner was selected by Juan Jose.  Each winner reached in a large bag and pulled out their prize.  Denny Mcgurer had donated stuffed animals from his grandchild.  They were the prizes and were they grand.  The kids went wild.  Our hope is future teams will continue the contest to encourage consistent care of teeth. Two of the winners are in the photos below. 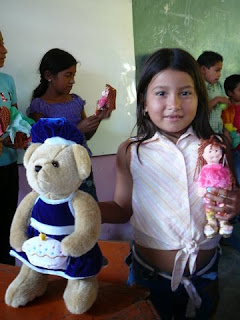 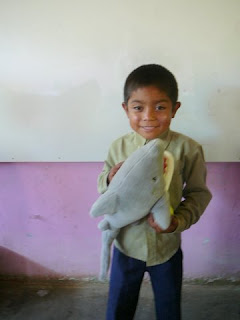 After lunch a group of us sat down with Vilma, the health care worker in Teo.  Vilma echoed Dr Tino’s comments on the powerful combination of Justa stoves and the nebulizer reducing respiratory problems.  We discussed training on breast self examination.  She was enthusiastic about this opportunity to improve the well being of the women in the village.  A God moment ended the conversation as Vilma told us this coming Saturday she was meeting with 25 women in the village for a chat on respiratory illnesses.  Teo is on the road to self-sufficiency!  Bruce and Jim met with Juan Jose Carbajal, water board leader, and Jose Membreno, president of the patronato, to discuss the status of various construction projects at Teo.

They have completed 40 of the 45 authorized latrines using a variety of designs.  When this project is completed, every house in the village will have a latrine. 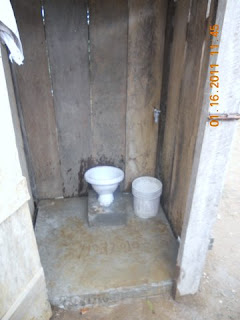 They need 20 additional desk/bench sets for the school.  We told them that we did not currently have funding for this, but that we would continue raising money for desks and benches.

We discussed the need to paint the unburied sections of the new PVC pipeline to prevent the pipe from becoming hard and brittle from exposure to the sun.  We explained that this would not happen quickly, but that it would happen.  We showed then a plastic jug that was cracking to pieces to explain our point.  They understood and agreed.

They have built 18 Justa stoves and need 25 more.  We told them that we would send more money for stoves as we collect it.  They said that they had seen a significant reduction in asthma cases after the Justa stoves were installed.  This was consistent with what Dr. Tino had told us. 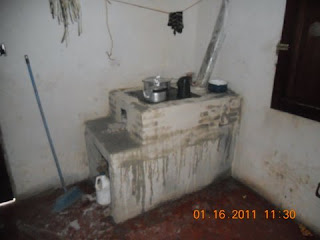 During our visit to Teo in January 2010, the women on the village said that they needed a Molino, which is a corn grinder.  Several times during 2010 there were additional discussions with Mr. Carbajal and others about the possibility of funding a Molino via a micro-economic loan.  We were chartered to try to move these discussions closer to a decision point.

A molino is different from a US-type grinder, which grinds dry corn kernels into corn meal.  Here, the corn kernels are boiled until they swell and soften and then they are wet-ground into a paste, which is used to make tortillas.  Currently, the corn is hand ground in a lava-rock bowl, which is very time consuming since this task is performed 2-3 times per day.  We had visited two Molino suppliers in San Pedro Sula on Monday to determine what molinos were available and their costs.

They said that they had seen a significant reduction in diarrhea cases since the new water line was installed.  Mr. Carbajal had a broad smile and kept saying “good water”.

We were very pleased with the feeling of a real partnership during these discussions.  It was a good day for us.