Hello to friends and family back in the states or whoever is reading this blog. Today has been a productive day filled with discussions of issues with community leaders, more water testing, fluoride/deworming in Banderas, and Biosand Filter work.

To start off the day, we were treated with a great breakfast of fritas (fried doughnut-like batter served with a thin oatmeal dipping sauce) made by Sandra and Gloria. After breakfast, we all left for Maynor’s office to pack up the fluoride/deworming supplies for our trip to Banderas. After arriving in Banderas, Karen and Pamela followed up with the kids on their lessons in dental hygiene taught by the February team. This was a complete success considering that the kids were still brushing their teeth every day and could demonstrate how they did it. After the follow up, they were given the deworming medication and were led outside for their 6 month fluoride treatment. The intense flavor of the fluoride almost floored Christa after she demonstrated for the kids. Once completed, we were led to one of the houses to look at their water and to take a bacteria test. We then walked to the community well to take another sample. We returned to the office in Quimistan to put away the supplies and to place the water tests to set for the next 24 and 48 hours. While in the office, we noticed that the water tests we took yesterday in Texoxengales had grown minor e-coli contamination. We returned to Martha’s where Josh, Ron, Mike, Maynor, Jose and the other Jose, and Carlos Rapalo worked on the sieves for the sand to be used with the Biosand Filters. Meanwhile, the other part of the team (Karen, Kristen, Christa, and Pamela) sorted donations and prepared VBS supplies for Saturday’s VBS in La Montanita. This lasted till around noon, when we ate lunch.

After lunch, the girls took a brief break to visit the owner of a local restaurant, where they joined a full house of locals watching the Honduras/Switzerland World Cup soccer game. The guys went back to work and completed the sieves just in time to go to Tejeres. After arriving in Tejeres, Mike, Ron, Karen, Joshua, and Pamela met with some members of the community to discuss problems they might have. The only major problem that they brought up was the problem with their water. We told them that we didn’t have the resources to provide them with a well at this time, but we discussed the possibility of using biosand filters to help purify their water. The men and women both expressed interest in this  alternative. Four of the men from the community stated they are interested in learning how to make and sustain the filters and are scheduled to come three days next week to be taught the process.  Kristen and Christa kept the children well entertained with face painting and art activities.  After the meeting, Maynor, Ron, Mike and I (Josh) went with some guys to Omar’s house to look at his filter which he received last fall, while Karen and Pamela met with a group of the women to discuss their concerns and needs.    Interestingly, the women stated that their primary concerns were maintaining the health of their children, educating them, and having them come to “accept Christ into their hearts.” When Gloria arrived with the food, we all assisted in serving the evening meal of rice and soup to approximately 50-60 children before returning to Martha’s. Everyone on the team then tried out our newly built sieves and sifted enough rocks and sand to make about four filter bodies. We then went and ate dinner and had our team meeting and came back and finished our day by playing cards with Maynor and Carlos.
Written by:
-Josh Livingston 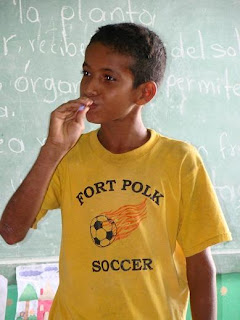 Demonstrating how to brush your teeth 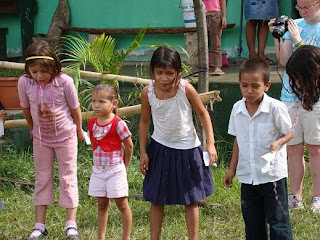 The flooring power of Fluoride!!! 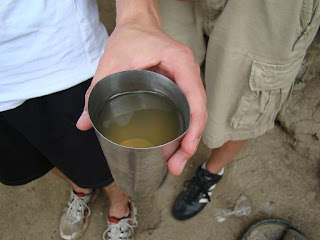 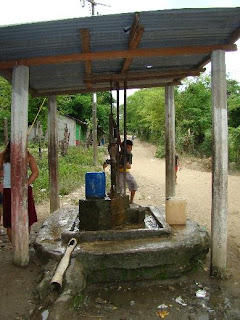 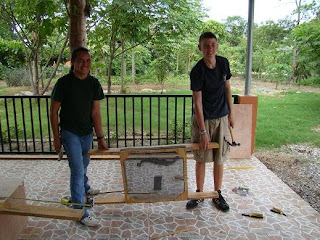 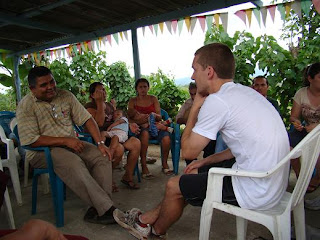 Meeting with the Tejeras community leaders 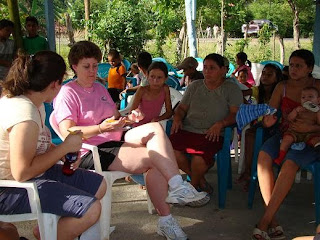 Meeting with the women 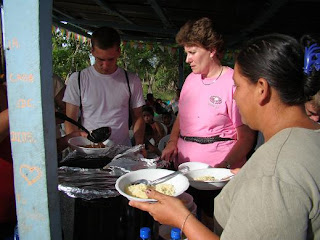 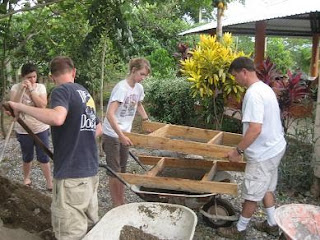 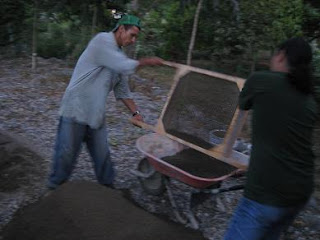