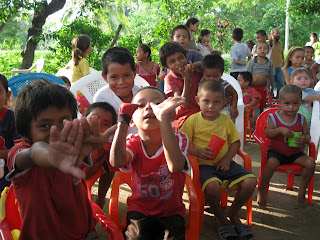 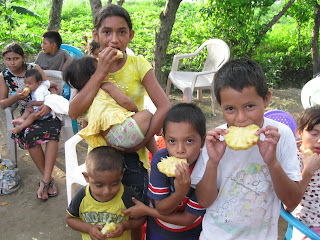 This morning for breakfast we had eggs, ham, beans, and pineapple. Then we left to go visit people’s houses. We visited houses that were built by previous groups, and we delivered beans and rice and clothes. Again, we were amazed that small bags of beans and rice could bring such gratitude. We went back to eat lunch, enchiladas. After lunch we went to Compassion’s after-school program for children. There we all played with the children. Pablo (Bob) blew up balloons and blew bubbles. Annie and Jeff played football. Abby and Anna played volleyball. Melanie painted the girls’ finger nails and colored with them. Then we went to the Tijeras’ feeding. Gloria cooked fried chicken pies for them. At the end, we helped hand out cookies and tennis balls. We were all moved by how patiently the children waited even though we know many of them were hungry. They also helped their little brothers and sisters.  We hope that we have learned something from these children. Returning home we were greeted by the children of the compound. We played with them. Then Sandra’s children and grandchildren came over so we played with them also. For dinner we had whole fish and Anna’s and Abby’s special macaroni and cheese.
Abby & Anna
With editor Pablo’s assistance!