Another HOT day.  I believe temperatures reached around 95 degrees with humidity making it feel like 115 degrees, but that did not stop us from accomplishing the task laid before us.  For the past four days we have been in the business of tearing down and rebuilding… (sounds a lot like what God does with us, taking the old and making it new.)  Tomorrow we get to take a break from the building, hauling, and digging.  Tomorrow we head up into the mountains (NE) to visit a site where we replaced roofs for a school last year.  There we will do a VBS for around 50 students and hopefully we will eat some doughnuts and drink some coffee.  In the afternoon we travel back down the mountain to the school at Milpa Arada to do a VBS for around 140 students.  It will be different from the last four days, but it will be a good change.  I have witnessed a lot of things on the several mission trips that I have been on and I must say, these college student still amaze me.  Their willingness to stay on the job until the job is done blows me away.  Yesterday the adults on Gloria’s site came in bragging about how in temperatures that reached around 95 degrees (real feel 112) the college students made a huge impression on them.  My friends, if our future as a Church and as a nation depends on students like these, we will be OK (of course God is the one who gives us the strength.)


Today at both sites we accomplished laying more blocks.  But what amazed us the most was the crazy way that the Honduran people build scaffolds, which is taking as many scrap pieces of lumber and nailing it together (some of the students because they are from the south termed it “redneck” scaffolding and “Death Trap 3000”.)  The Honduran  people are amazing to watch work.  They are the ultimate in recycling.  However their work ethic and craftsmanship is amazing.  Each of us have been trying to learn their language and at times get a good laugh out of the Honduran people when we miss pronounce their words. So far we have had a great trip.. .the team has come together and God is in control.  We will accomplish whatever it is that God has planned for us and then the rest we will leave for the foundation. 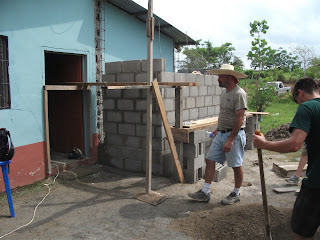 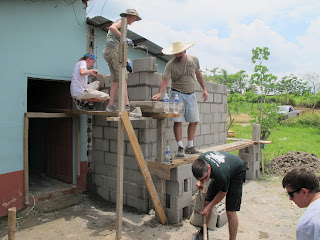 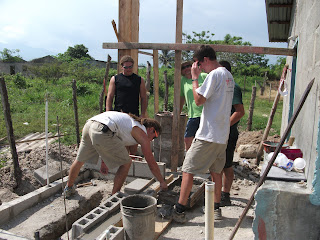 Laying block behind the house, where the pila will be relocated