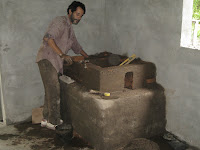 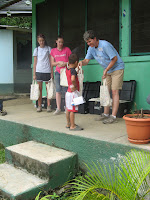 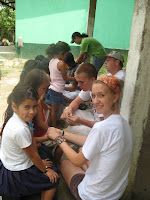 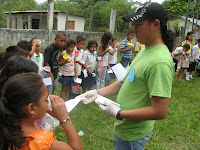 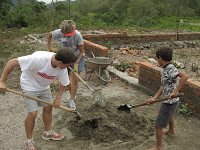 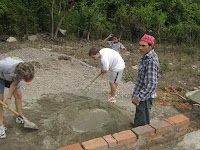 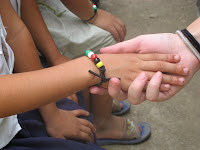 There were two groups of people today; one went to Banderas to do VBS-ing, and the other went to Santa Clara to continue work building the foundation for the school and the cafeteria. Donald, Beth, Christa, Annalise, Lauren, Lila, and Brian ventured to Banderas for the morning. Contrary to popular belief, VBS does not stand for Vacation Bible School; it stands for Vivacious Biblically-inclined Students! The ve_be_es- iendo, as the Hispanics say it, was ultimately a success although the kids seemed to be reluctant at first. There were approximately 35 kids Kindergarten – 6th grade and they were given bags full of school supplies made by the 4th grade students at Aiken El(ementary). The kids were greatly excited upon receiving their tote bags and many of them changed colors as a result of such excitement.
The crew that went to Santa Clara consisted of Cecelia, Ardyn, Eric, Sam, and Roxanne. Two activities that they alternated between were concrete mixing and wheelbarrowing the very same mixture of concrete, but, of course, before it dried. Changing wardrobes was not an activity. Lunch was a gift today, as the group had an hour and a half break. Entonces, Sam Ardyn, and Erikric went adventuring through the metaphorical jungle that is not really metaphorical because it is real. The three of them ended up taking many wrong turns and got lost as they were intending to go to the bean fields and make sure that the beans had not gotten washed away by the rain. Reaching the intended destination was achieved after all, and indeed there was a grand celebration when the beans were found to be intact and growing. While this undertaking was going on, Lila and Brian came from Banderas to Santa Clara for some heavily traumatic and concrete work. After this, Eric, Cecelia, and Ardyn helped to pick up garbage around the town in Santa Clara.
As soon as we went home the excitement ended. And then the day ended. And then the blog ended.

A picture was taken of a stove that uses 75% less fuel than other stoves and it’s being constructed, and tomorrow she’ll be able to use it.

-Note from the Editor: In the spirit of youthful enthusiasm and intellectual prowess, I have elected to publish this post as it was written. Readers need to beware that some information contained within is not strictly factual (no one actually changed colors). Also, be aware that important work did occur that was not delineated within: fluoridation was done at Banderas, and relationships between the Hondurans and the Americans (Canadians included) were cemented, as were the walls.