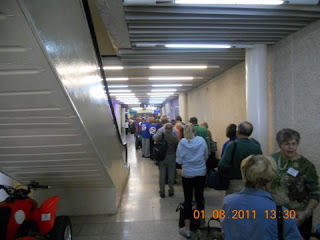 Like travelers of old, a semi-caravan of four cars left Aiken Friday ranging from noon to 2:30 for the easy drive to various hotels in the Atlanta airport. After excellent dinners at several restaurants and a good night’s sleep, we met at Gate B16 (after first reporting to E18 as directed during check-in) for the 3 plus hour flight to San Pedro Sula. The flight was early, but the immigration lines were packed and we had to wait in long lines. Fortunately, an immigration officer recognized June and we were moved to a much shorter entry lane — it pays to have recognizable team leader. After claiming our bags and the team trunks, we boarded a bus and a SUV for the one hour trip to Quimistan. George, Jim, and Bruce attempted to visit several merchants in San Pedro Sula en route to Quimistan to price corn grinders; unfortunately, these merchants were closed.

After a few minutes to put our bags in our rooms, the team took a short tour of Quimistan to acquaint the new team members to our surroundings. During a quick tour of the hospital in Quimistan we had a bit of a frustrating period as the bus’ battery started acting up, fortunately repairs were made, a la shade tree mechanics. Saturday evening after supper we finished formulating plans for Sunday’s AP celebration program, and then good fellowship followed by much needed sleep.

Sunday morning we finally got the internet connection to work – would you believe how much better the connection is when you have the correct password. After devotion and , we brought from storage to the community room case after case and box after box of donated glasses. We have to sort these glasses tonight in preparation for the several eye clinics we will hold, the first one tomorrow morning at Luz Del Valle school for the people of Tejeras. The team then departed for a short drive into one of the Quimistan neighborhoods where our hostess Martha holds an excellent and heartwarming Sunday school. Started two years ago with just 14 students, the children’s bible study has expanded to about 300 students split between two sessions on Saturday and one Sunday morning. The children ranged in age from toddlers in care of their 4 to 6 years siblings to 6th graders. All were well dressed, cleaned, and very attentive to the hour long program. One of the moving moments of the morning service took place when Martha asked for all the first born males present to step forward. Individuals from Honduras, Guatemala and our mission group members George, Allen, Bruce, and Denny were included. Martha then offered a special blessing and referenced the responsibilities and faith that the Lord had given and placed on us. As we now prepare for doing the Lord’s work in the Quimistan Valley, we are also basking in 85 degree weather with a bright sun and a gently breeze vice the projected snow and ice storm for Aiken tonight. 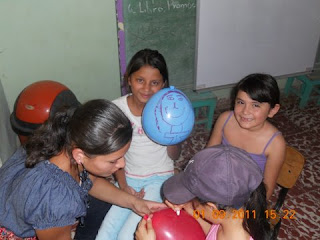 After lunch we climbed back into our van and SUV and headed to Kinder school in Quimistan to attend the AP student’s Sunday afternoon’s bible study. This week’s activity consisted in having the younger children, with the older kids mentoring, drawing their own face on a balloon. They then attached their balloon to card stock and passed it around their small group. Each child in the small group wrote a characteristic of that child on the card. Pre-printed on the card stock as the phrase “God created the human being to his own image.” “God looked at everything he had done and considered that it was very good.” A healthy prepared meal was provided to all the younger children. The team then hustled back to the “ranch” to prepare for the arrival of the AP high school graduates and their family. Each AP graduate was recognized and the team joined them and their family to an excellent fried chicken dinner. Graduation gifts were presented from the Honduras Agape Foundation to this year’s graduates: Carlos Miguel, Albania Carolina, and Denia Catalina. Keyla Merari was not present to be awarded her gift. Leticia Martinez, the AP Bible school teacher was recognized and presented a token of appreciation, the book, “A Mile in My Shoes”. Each of the graduates expressed their appreciation to God and the Foundation. Additionally, three previous graduates expressed their appreciation: Vilma Aguilar and Laura Garcia spoke in English while Carlos Rapalo spoke in Spanish. 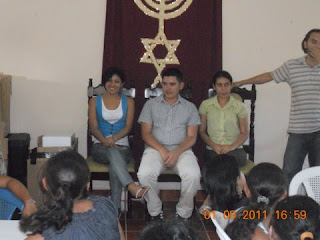