Thursday, July 1st, 2010
Hello to all. Today was slightly busier than yesterday, so hopefully this blog will cover everything. This morning Maynor, Kristen, Karen, Pamela, and I (Christa) set out for Jicaro, a small town outside of Quimistan. We provided fluoride and deworming to the twenty students there. All in all, it was successful; worms were removed and fluoride was swished. We also covered proper dental care, a lesson that the students seemed to remember very well from their last lesson with the team. While most of the class still had their toothbrushes, a few didn’t, so we left some for the teacher to distribute. 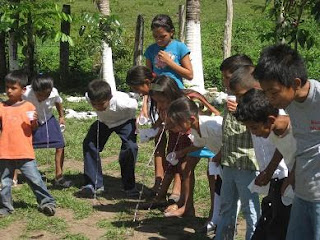 While we were working in Jicaro, the guys were hard at work on the filters back at the compound. They sweated over sifting rocks, moaned over washing the sand, and generally got a lot of work done. They finished the two filters with the help of Adam (pronounced Adan), the pastor from Brisa Del Rio. We returned for a delicious lunch of espaghetti, and then went right back to work washing and sifting sand which would be used in the newly constructed filters. 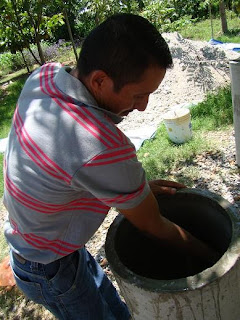 Shortly after lunch, the team presented Adam with his own filter, which we delivered to his house. Though his house isn’t too far from Martha’s place, we had to bypass the less than sturdy rope bridge across the river and go the long way around through San Marcos because the filter was too heavy to carry across the bridge. Once there, the guys set the filter up, and Mike went over all the features and rules that accompany such devices. The filter was filled with a small amount of water and gravel and the flow rate was checked to insure proper flow of the water before the rest of the filtrate was added. Fine gravel and sand was poured in slowly, then water, then more water, then they took some of the dirty water out, then they put fresh water it back in and so on until the level of filtrate and water flow were properly adjusted. I’m sure the guys knew what they were doing but it was too hot in the house for me and it was taking too long. Eventually they got it up and running, and they will return tomorrow to check up on it again and do a back flush with chlorine bleach. Several team members drank fresh coconut milk harvested from Adam’s coconut tree. 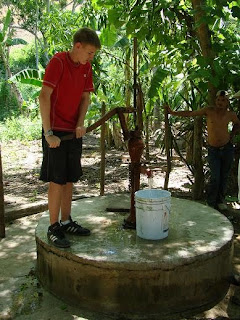 Afterwards, we returned to Quimistan for a brief visit to the the souvenir shop in La Flecha before visiting some more of the little kiddies that I’d met and had the pleasure of drawing from years past. I was successful in finding one of the girls in my picture, and her mother said the other two boys lived nearby so overall I guess it went well. The girl was really young when I met her, but I know her mom remembered us so I didn’t feel completely weird about giving it to her. From there we went and found Francisco, my grandparent’s sponsor child. Kids around here apparently have no qualms about getting into cars with white strangers. Mike and I took him shopping for a new shirt and shoes which he seemed to really appreciate. The rest of the team invited Ortwin, the Livingston’s sponsor child, to join them for ice cream while they waited for us to finish. Back at Martha’s, there was an epic “Machete Fight.” 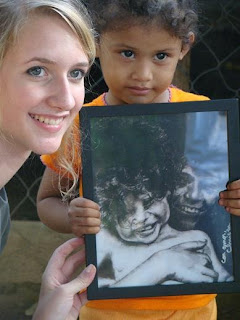 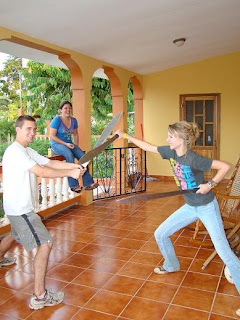 Then it was off to do more sifting and various other sand related tasks. In the evening Nelson and his friend Franklin came by to play volleyball and a fun time was had by all.