Today’s events can only be called a series of adventures. 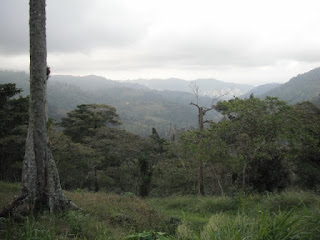 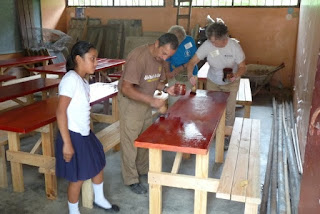 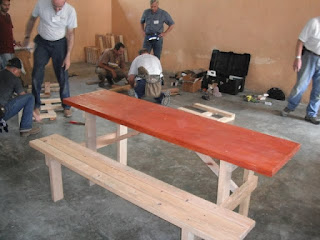 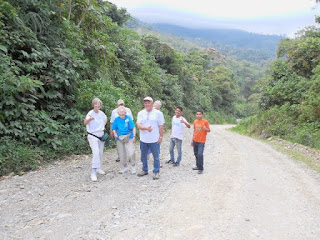 Other words come to mind as well, but adventure describes the day best. The schedule sent us to a mountain village called Nueva Esperanza. The name, which means “new hope” is an apt one, as the village has found new hope in the visits of the HAF teams in the past few years. A few years ago an HAF group from Wilkesboro, N.C. provided a new roof for the schoolhouse, and in this trip we took the makings for 15 picnic tables to be used as desks for the students. We found a very delightful school–students and teachers as well. We don’t know much Spanish, and they know no English, but you’d be surprised how well we communicated with our charade skills, our smiles and gestures, and hugs.
While the team guys and some Honduran guys built the desks, the women in our team busied ourselves with deworming, hand washing, tooth brushing, and fluoride treatments. After the “work” was done, we had fun with the children with games, crafts, blowing bubbles, and frisbee. The boys in the classes played a game of soccer, demonstrating well that that game must be part of the Honduran DNA. (And don’t you know that our translators have given us untold grief about the recent World Cup soccer game in which Honduras players defeated the USA.)
We have described already the beauty of the Honduran countryside with its mountains, lush vegetation, and bubbling brooks. But never believe that it is easy to travel the winding roads up to the mountain villages. I can only tell you that the “adventure” involves slowly driving along, avoiding ruts in the road, swerving around huge rocks, and driving through enough water that one might think that a bridge would be called for. Our most dramatic happening came when the pickup truck that some of us were riding in came to a screeching halt and announced that it could go no further up the next steep incline. If you look at the pictures, you will see that the problem was solved when all riders except the driver got out and struggled up the steep road for about 1/2 mile to the next flat space where the pickup was awaiting us. We have noticed many contrasts in Honduras, from houses with thatched roofs and no electricity to nice homes with TV dishes. We’ve also seen not only young professionals in the towns wearing modern outfits, but also children with no shoes. Whatever else is going on in the culture, one thing is for sure: God is busy in Honduras, transforming lives and hearts…not only among the Honduran people, whom we have come to love, but also among nine motley Presbyterian missionaries from South Carolina.

P.S. As we worked on the tables, we were very surprised to hear loud music coming from a small truck. We were even more surprised to learn that in was an old-fashioned ice cream truck. The ice cream break was great!