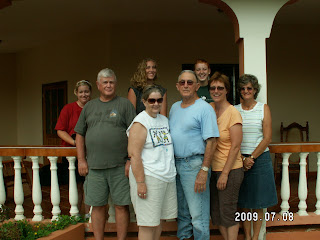 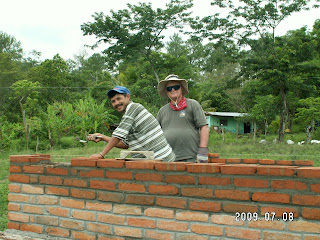 Today was a day of mixed emotions – we had to say goodbye to Ardyn, who returned home today after being in Honduras for almost a month. We hope she had a safe and uneventful trip home!
While Roxanne took Ardyn to the airport, and Maynor, Jacobo, and Gloria to purchase supplies for the future teams in San Pedro Sula, the rest of the team (6 of us) went to Santa Clara to work. Guillermo’s house is almost finished – the walls are done, the roof is on (and what a fine looking roof it is!), and today, we helped to clear out the house of general debris in preparation to put in the floor early next week. Shirley and Jenn also mixed cement for the walls – first Otoniel (literally) slaps cement on the wall and smoothes it out. After that dries, he will put on a mixture of some chemicals that makes the walls white which allows them to be painted – kind of like stucco. They do this for the bedrooms, and leave the living space with brick walls. It looks awesome.
We also helped with the building of the classroom for the kindergarten in Santa Clara. Deirdre and Sam, George, and Cecelia assisted Lencho by mixing cement, applying mortar, and laying bricks. They were able to lay four rows today! Great job! It seems that tomorrow they might get to the section where they will have to allow for the windows – exciting to see it go up so quickly!
Before a delicious lunch of bean soup, Deirdre and Cecelia taught the children the Canadian (and sensible!) version of Duck, Duck, Goose (Pato, Pato, Ganso) – watching the kids hustle to get their spot so they weren’t “it” was hilarious, especially when that “kid” happened to be Deirdre or Cecelia!
While it looked a lot like rain on the ride home from Santa Clara, and there were some very threatening clouds overhead around dinner time, it seems we were spared the torrential downpour that we experienced yesterday. Tomorrow is another day of hard work, and we are excited to welcome four new members to our team – the Livingston family! We can’t wait to have you join us!