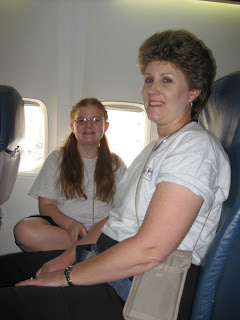 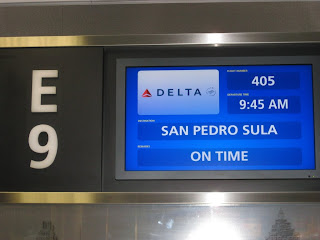 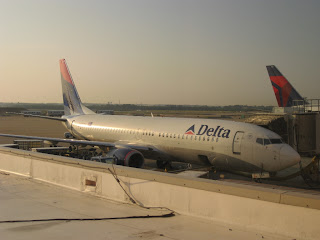 Yesterday was a happy- yet hectic- day for us Livingstons. We finally arrived at the Airport in San Pedro Sula about 10:45 am (half an hour earlier than scheduled) and went through immigration in a about 7-8 minutes(which is not normal from what my parents tell me). We walked to the baggage claim and waited for the 7 trunks and Karen’s duffel bag. We waited, and waited and waited some more… for about 45 minutes we waited until everything had been unloaded from the airplane we came in on. Our luggage never arrived! So we talked to the Delta Representative, and had him track our bags. Guess What? They were in Columbia, our starting point. They had even had an extra day (Friday) to get them here. Oh Well. We eventually met Mrs. Roxanne and the three other assistants who had come in to help transport us back to Quimistan, and being hungry, several of us decided to stop at a local joint in the city for some “Power Chicken” sandwiches. By this time, feeling rather worn out from our past two days’ adventures, the local “pollo” was a welcome relief. We arrived at Martha’s about 2 pm after a uneventful ride and a view of the local scenery. We made it just in time for the regular afternoon storm, but we got indoors before we could get soaked. Karen and I went to our rooms to get our stuff settled, and Ron and Joshua did the same (I think). Around 2:30- 3:00 Cecelia, Cookita, and George got home after being in Santa Clara. During the early part of the day, they had continued with the brickwork on the classroom building. They freshened up and we started working on sorting and preparing VBS supplies for today (Sunday). Many of the VBS supplies that we had prepared and packed in the trunks for our team were, of course, still in Columbia. Fortunately, the rest of the team who had worked at the kindergarten in Q-town, joined us and helped cut construction paper for the weaving project and stuff bags for the children. At about 5:45 we went into the “dining hall” and had a delicious dinner. We finished up, had our team meeting to organize the VBS activities and the AP skit at 7:00 to about 8:15, and then we went our separate ways for late evening. We will try to post some pictures from the day’s activities later.